Generation and value changes in Lithuania: a few insights through the prism of European Social Survey 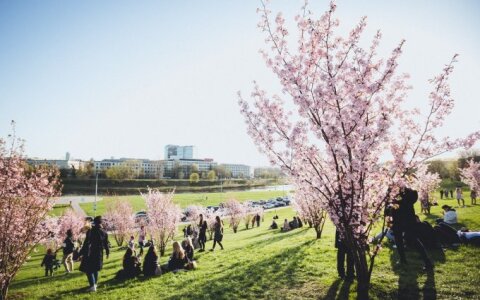 In recent years in Lithuanian politics, or even more broadly in the whole public sphere, it has become popular to talk about a renewal that has been almost exclusively related to some younger people coming to various public positions. In other words, it is all about a generational change. Today or exactly 30 years after the reform movement Sąjūdis inspired political and social revolution in Lithuania, such generational change is inevitable simply due to the flow of time. But much more important than just simply to state that Lithuanian society is experiencing fast generational change, to think about what this change means and what it brings. Let's discuss today only a relatively narrow subject – values and generations – with a simple question: can we observe value changes comparing the older and younger generations?

Related articles
The Lithuanian middle class: are you in it?
Celebrating March 11: unique Lithuanian patriotism

A few remarks about generations

A very dynamic generational change is taking place and will continue in near the future in all areas in today's Lithuania. It simply cannot be otherwise as the pre-independence generations are replaced by the post-independence generation. How fast this process might be it is well illustrated just by the fact that even those who were born in 1990 or at the moment of all political transformations begun, today are 28 years old -- still young but reasonably grown up and mature. Moreover, if we look through the prism of technological innovation, it is namely those over twenty and around thirty who have presented most of today's well-known innovations for the last 30-40 years globally. If we are to check the age of the founders of Microsoft, Apple, Google, Amazon, Alibaba or GetJar, which has clear Lithuanian roots, when they started with what they have achieved now, we will be easily convinced that young age proves beneficial for breakthroughs in various areas.

Furthermore, the youngsters who were just 18 at the time of the re-establishment of Lithuanian independence are 46 now. They are rapidly approaching their middle age and have already earned their importance in different spheres of social life. The same generation, however, is the cause of most anxiety. They may be referred to in a more Lithuanian way as the generation of Gariūnai market (in Lt. Gariūnų karta) – the children of poverty socialization as well as political and social crisis. This crisis of the last decade of the 20th century reached its bottom in 1992. Afterwards, some modest signs of recovery appeared, but a very short period of social and economic growth was eventually destroyed by the bank crisis at the end of 1995. Again, after few successful years came the Russian financial crisis of 1998-1999, and only by 2001 was Lithuania able to pull through. According to a Chinese proverb, if you want to wish somebody bad luck, you wish them to live in a time of change. The 1990-s was indeed the time of nearly constant turbulences and uncertainties in all senses. This turning point in the very peculiar Wild East style undoubtedly made an especially strong impact on the socialization of youth. And almost throughout the whole decade. Or possibly even longer.

Today we are surprised that after almost three decades of democratic life we again have an incredibly broad class of conformists and sycophants in our society. Our lexicon has had a new generalising term added – eurokomsomol (which emphasizes behavioural similarity to activists of the former Soviet Young Communist League) to describe contemporary careerists. So much of conformity, careerism, individualism with clear elements of narcissism, alienation, exhibitionism, climbing over people's heads when the aim justifies all means was hard to imagine and the presumptuous mediocrities are obviously in high surplus. On the other hand, some things that should be socially shocking are widely ignored. For instance... when the author of a dozen books, some of which are included in the school curriculum, Jolita Skablauskaitė, dies in severe poverty and exclusion; or when the media reports of a music composer living on a 132-euro pension..., i.e. significantly below of poverty line. The first feeling about all this is that it is a somewhat confused and chaotic time. It looks like we would be living in a kind of the 19th century, because such things should not be happening nowadays, but they do, and this is the part of Lithuanian reality. Then perhaps it remains just to agree with Rimas Tuminas, well-known theatre director, who recently and publicly stated that Hell is already on Earth.

Critical thinking, however, which may help us to regain at least partially the true understanding of reality, has been left in the margins. Instead, we have groups of the new "monopoly of truth" from the sects or bubbles of social networks that have all answers to all possible and impossible questions. One more problem: the first post-independence generation lacks education as during political and social transformations good education could have hardly been achieved. The lucky ones were those who spent more of these years in the Western universities.

In this context of generational change, one often refers to the story of Moses who was guiding Israelites over the dessert for 40 years to bring up a new generation... It is indeed a revealing story, but it may also infuse an illusion that generational change can mechanically make a society more civilised and more decent. Unfortunately, this may not necessarily happen.

About values and not only

Well, let's stop with these rather sad contemplations. Let's turn to the European Social Survey. From the very beginning in 2001 it has included a special module aimed at the analysis of values. This module on values was formulated by a prominent Israeli psychologist Shalom Schwartz. Generally speaking, values are understood as people's essential attitudes which justify or explain their views and opinions as well as condition their actions. Values reflect the most important social changes. Shalom Schwartz has offered 10 subgroups of values from power, achievement and hedonism to benevolence, conformity and security.

From the perspective of values, every generation is diverse and cannot to be measured in the same way. What is most important in each generation, however, are the fundamental trends as well as the existing value differences and similarities among different generations.

This time let's not get involved with comparisons in time and with other countries and just focus on Lithuania. The fact of society's division into two age groups is further shown – up to the age of 45 inclusively and 46 and above— is a decision made after a few attempts in grouping the respondents into several age groups. Several experiments with age groups have revealed that namely this society's division into only two groups in terms of age is probably the best to reflect generational differences.

Sometimes change might be sudden and sharp. Just one example from a real life, i.e. a case of knowledge of Russian language in Lithuania. Today those who are 36 or over still can speak Russian fairly well, but the ones of 33 or 34 years of age and younger speak Russian much worse, because they been socialized with English as primary foreign language. Now in Lithuania much effort is made to fight Russian propaganda. However, the Russian propaganda hardly has any impact on the younger generation as most young people barely speak and understand Russian....

Let's stop for the last time and turn directly to the values. One of the most significant societal or human values is power. Shalom Schwartz has indicated wealth as one of its most important features. In that regard, generation differences are obvious: almost 40 percent of the younger generation respondents have identified themselves as similar or very similar to a person to whom it is important to be rich, while there are only slightly more than 17 percent of such respondents in the older generation (Figure 1).

Materialistic aspirations, which are anyway visible in society, are only confirmed by the European Social Survey data. The value of power is closely linked with the desire to be successful. The younger generation is again more obviously oriented to success than the older generation: almost 60 percent of the younger respondents and 44 percent of the older ones want their activities to be successful and appreciated by others. The difference is not twice as big as in the case of power, but still considerable. On the other hand, orientation towards being successful seems to be the most important value for the younger generation bearing in mind that success is desired by more than its every second respondent. 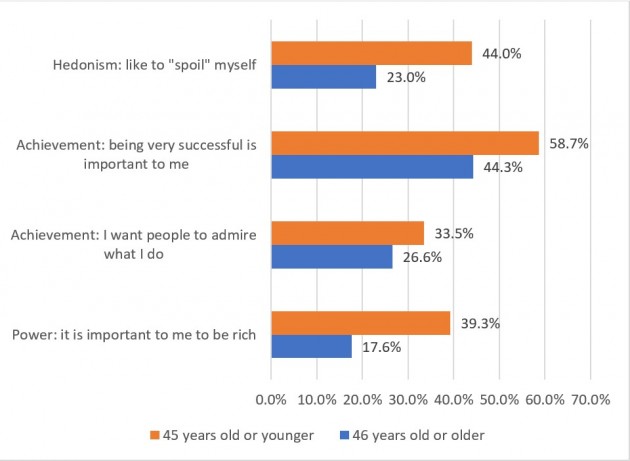 The values of power and personal success somehow culminate into the hedonistic needs: among the younger respondents, 44 percent are willing to have a good time and to "spoil" themselves, whereas in the older generation there are 23 percent of such respondents. The above-mentioned values at least partially explain not only the younger generation's strong orientation to materialism, but also its individualism and egocentric behaviour.

Generational differences in the value group of tolerance, benevolence and conformity are not that large, and in the case of tolerance, both age groups share similar views. About 30 percent of both age groups believe that it is important to tolerate different opinions (Figure 2). Nevertheless, this percentage is somewhat too small a part of society for it to be unconditionally called tolerant.

About three out of ten younger generation respondents and more than four out of ten of the older ones think that it is important to help and take care of people around them. Thus again, in terms of the potential for benevolence the older generation surpasses the younger one.

Although conformity as a value is often viewed in the negative light, in the European Social Survey a question with positive rather than negative connotation is used to measure it: "it is important to him/her always to behave properly. He/she wants to avoid doing anything people would say is wrong." In that way, conformity indicates rather an acceptable behaviour in society than challenges and confrontations. As could have been predicted, slightly more than one third of the younger generation are inclined to ignore social norms while almost half of the older ones tend to conform to proper behaviour. 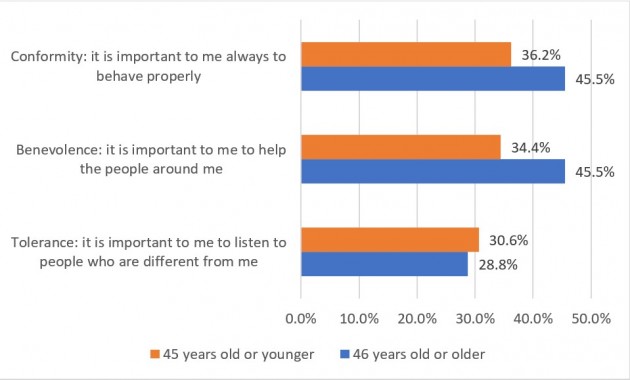 Given that values are undoubtedly related to behaviour, to finish with, one observation about behaviour should be made. There is a very specific question: did you vote in the last Seimas election? As usual in the exit polls, slightly bigger part of the respondents indicate that they participated in the election, because in fact a somewhat smaller percentage of people come to vote. This happened in this case as well. On the other hand, the difference of some percent is not essentially important when political participation of several age groups is compared. Participation in the election of parliament is undoubtedly a good indicator of political activity and it shows that generation differences are obvious. At least close to 2/3 of the older generation came to the elections of the Seimas, while less than half of the younger generation participated.

The general picture of political apathy, especially among younger generation, is a consequence of its socialisation. Moreover, this generation has experienced a massive indoctrination of neoliberal values, when the rescuing of a drowning person is considered his or her own problem, and has seen and felt many serious disabilities of the society of the new democratic country. No more comments are necessary here. What is really needed in Lithuania in addition to the necessity to make social and political systems more inclusive and responsive, is perhaps a certain reset of human values being needed and with all this aimed at broadening of influence of attitudes of solidarity, justice and equality in a whole society.

Generation and value changes in Lithuania: a few insights through the prism of European Social Survey