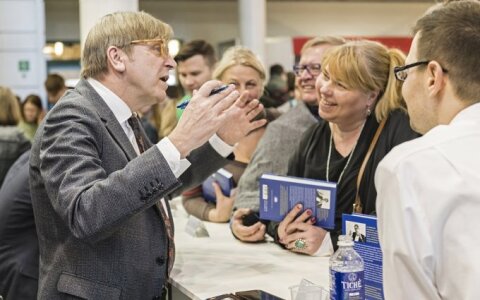 A large enthusiast and captivated audience came out on a very cold Saturday afternoon to hear former Belgian Prime Minister Guy Verhofstadt speak at the annual Vilnius Book Fair. Verhofstadt is currently fraction leader of the Liberal Group in the European parliament. However, on Saturday his main message were his ideas for European reform and to make the EU stronger, more efficient, and to avoid more Brexit-like defections of the world's largest and most powerful trading block.

Always the enthusiast and animated politician, Guy Verhofstadt came during his short visit to launch his latest book about Europe ''Paskutinis Europos šansas. Idealo paieškos'' (in English Europe's Last Chance: Why the European States Must Form a More Perfect Union).

In a panel session with Ramūnas Vilpišauskas director and professor of political Science at Vilnius University and Liberal MEP, Petras Auštrevičius, Mr Verhofstadt showed that he is not only passionate about Europe, he is even more avid about forms to save the project that has brought unprecedented peace and prosperity to a continent.

Nevertheless, Mr Verhofstadt has a number of critiques towards the European Union and has plenty of suggestion to become more efficient, stronger and in a number of areas more integrated. Not doing so according to the Liberal politician will lead to others following the UK in leaving the EU. On that very same subject, he sees Brexit happening at the end of March 2019 and with the country then slipping into a transition period. He did not mention how long that will period will last, but he blamed the other 27 member countries for allowing it to happen.

Guy Verhofstadt criticised the present structure for slow action after the 2009 financial crises and with far too limited financial resources to combat such situation, particularly in comparison to the USA. He reiterated several times that the need to always get a consensus among 28 partners States slows down the EU and puts it behind countries that are much faster to take action, such as US, China, the USA even India when fast action is essential.

He also lamented missed opportunities particularly in Internet and digital developments that require often dealing with 28 regulators in each of the member states. Communication technologies often see ideas developed in a European country return like a boomerang kid after being rolled out first in the USA.

He criticised the needless duplication inside European defence. Europe spends 40% of the US military budget, second highest in the world, yet Europe spends more on the military than Russia or China. He praised Schengen, put pointed out the need for more action and more resources for Frontex to patrol the common exterior border, now hampered by far too low a budget.

However, the committed European ended on optimistic note with a Europe enjoying a new wave of energy by a committed European French President proposing numerous ways to improve the European project. Verhofstadt argues in his book that the European Union must reform in a similar direction as the US federal government system, a kind of United States of Europe. Not just a large trading block but one that stands with the United States of America to ensure a safer and better free world..

He ended with saying that he sees no contradiction between being a Vilnius person, a Lithuanian and a European. Citizens can be engaged at different levels but they are all Europeans.