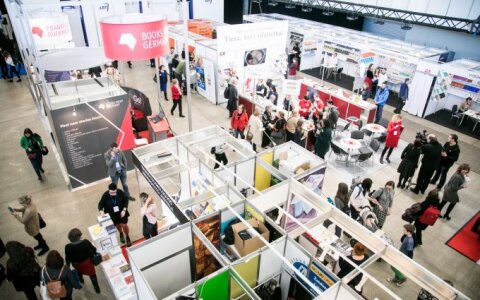 The four-day Vilnius Book Fair is opening at the exhibition and congress centre Litexpo on Thursday.

At the opening of the fair, President Dalia Grybauskaitė noted that this year's event was special, as it was taking place on the 100-year anniversary of the country's restored statehood.

Noting the slogan of this year's fair, Reading Lithuania Reading the World, she emphasized that the event brings major international attention to Lithuania.

"Today we are the regional leaders, European-level leaders who show their capability to not only write and publish books but also illustrate them and create a large scale as a cultural phenomenon. Our creators will not only be writers of books but also illustrators, people creating books for children, our musicians. (...) This is a phenomenon that shows our capabilities, and this should make us all proud in ourselves," said Grybauskaitė.

Culture Minister Liana Ruokytė-Jonsson said the fair was one of the most important cultural events in the country, wishing to discover Lithuania in the world through reading.

Held for the 19th time, this year's fair should bring together 53 foreign delegations from 21 countries, including coming from Canada, the United States, Iran, Oman and Israel.

The fair will this year include 370 participants and 564 cultural events.