Expression of disagreement with the Lithuanian vote on Jerusalem: damage to national interest 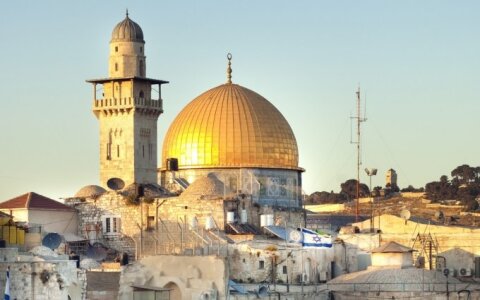 At the initiative of the Lithuania – US association, a group of public figures, intellectuals, politicians and journalists voiced their disagreement on the Lithuanian vote in the December 21, 2017 UN General Assembly.

"It doesn't even matter what the vote was on. What matters is that the USA publically and officially requested to not vote against, but Lithuania did. In this case it was possible to match both US and EU interests as the Latvians and Poles did. They abstained from voting. If we hope that US troops are to be ready to die for Lithuanian freedom, we have to be more attentive to US positions. We are all seeking for Lithuanian foreign policy to be united, however in this case such a vote did not appear right to a part of the public. As such we have expressed a separate opinion," Lithuanian – US association president professor Raimundas Lopata told Delfi.

Related articles
K. Girnius. Lithuanian-Israeli friendship, but where are the values?
Lithuania's unexpected vote on Jerusalem: against Trump, in solidarity with EU  (3)

In light of Lithuania supporting the UN resolution on Jerusalem on December 21, 2017, that is to say against the US position and ignoring a clear US request to not vote against.

Lithuania's neighbours Poland and Latvia abstained in voting in consideration of this request.

The US ambassador to the UN, N. Haley stated after the vote that "The United States will remember this day in which it was singled out for attack in this assembly."

The US mission to the UN expressed the position that "It's clear that many countries prioritized their relationship with the United States over an unproductive attempt to isolate us for a decision that was our sovereign right to make."

The USA is the most important state in guaranteeing Lithuanian security both through NATO and on a bilateral basis,

It is in Lithuania's vital interest to develop relations with the USA and US leadership in the world.

We are convinced that the responsible individuals who chose to vote against the USA in the UN assembly did not consider the entirety of Lithuanian state interests in doing so.

We who signed below express our disagreement with the official foreign policy of the current government in regards to this issue of import to the state.

Signed by:
1. Petras Auštrevičius, Member of the European Parliament

14. Vitalijus Gailius, Member of the Parliament

19. Albinas Januška, Signatory of the Independence Act, advisor to President A. Adamkus

45. Paulius Saudargas, Member of the Parliament

50. Povilas Urbšys, Member of the Parliament

57. Emanuelis Zingeris Member of the Parliament

Expression of disagreement with the Lithuanian vote on Jerusalem: damage to national interest