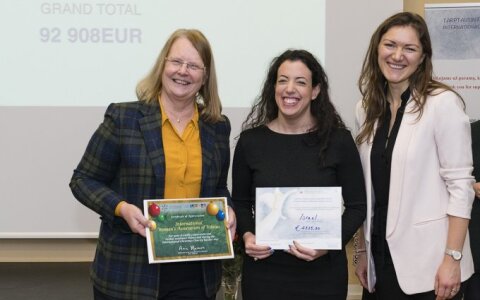 During the 15th International Christmas Charity Bazaar various stands had collected a grand total of 69,196 Euro. A further 23,712 Euro came for cash donations for a grand total of 92,908 Euro. The announcement was made on Thursday during a short ceremony in the Kempinski Hotel in Vilnius.

This year's Bazaar Chair, Ebba Michelsson, wife of the Finnish Ambassador to Lithuania welcomed the Bazaar's Patron, Mrs Silvija Skvernelė, the wife of the Prime Minister and all the sponsors, volunteers, and participating embassies and organisations. Mrs Michelsson was delighted to announce that money collected also had been augmented by a small surplus left from last year.

Before proceeding with the distribution to this year 10 beneficiaries, the guest were entertained by the ensemble "Lirum" from the Balys Dvarionas School of Music in Vilnius (Balio Dvariono dešimtmetė muzikos mokykla). The delightful choral songs were performed in the spirit of a season of celebration, joy, and giving.

"Aidas" Centre for children with special needs in Valakampiai area in Vilnius was one of the beneficiares which received 10,000 Euro. Acting Director, Sigita Bajarciutė explained that the Centre offers education and physical training for mental and physical impaired children and young adults from 3 to 21 years old. The Centre will buy some equipment as they needs to have a ramp for wheelchairs to allow children that are unable to walk to gain access to a swing and other equipment in order to train in the outside play and sport grounds.

Another recipient of this year's Bazaar proceeds was the Vilnius based Pregnancy Crisis Centre "Krizinio nėštumo centras". The crisis centre helps women facing unplanned pregnancy, loss of a baby due to miscarriage, premature birth, or abortion. Director Zita Tomilinienė explained that the Centre gives psychological and mental support to women in crises, particularly single mothers that face multiple challenges in raising babies. With the money from the Bazaar, the Centre will be able to buy the boxes to deliver clothing, diapers, strollers and other material needed to raise children, primarily during their first year of the babies.