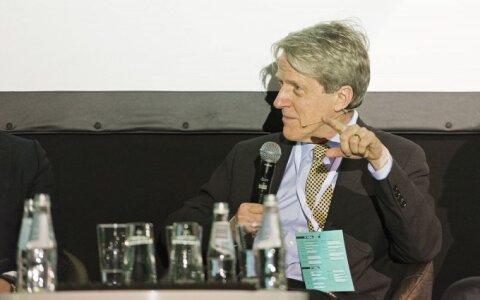 Nobel Prize winner and Yale Professor Robert Shiller overshadowed the entire Fintech Conference on Thursday in the Radisson Blue in Vilnius. More than 500 policy makers, academics and business representatives from Lithuania, the United States, Sweden and several other countries attended the conference addressing various future impacts on financial transactions in the Radisson Blue.

However, the starring role belonged to 2013 Nobel Prize winner, Robert Shiller. As the keynote speaker at the Fintech conference, Professor Shiller had a number of critical observations about Bitcoin, the hot topic dominating the financial news as well as what may have prevented the run-up of the large debt that most Western Countries have piled up since the last financial crises.

Professor Shiller started out by briefly telling about feeling at home in Lithuania as all of his four grandparents were Lithuanians, having arrived about 100 years ago in the USA. He said, "My father was an inventor, an innovator, and a businessman and I will continue that family tradition.'' He added, ''Engineers are people who adapt science to deliver the right things. That is what financial engineering, Fintech is just about." Now he believes that Lithuania may become a regional leader in financial technology and he offered some advice.

Related articles
Fintech start-up Revolut applies to Bank of Lithuania for banking license
Luxembourg wants to cooperate with Lithuania in telecoms, finance, IT

On the subject of debt and the costly rescue plans, Professor Shiller suggested that it could have if Lithuania and other countries had practised more innovative ways, such as bond linked to GDP, rather than issuing typical bonds. He certainly did not have Bitcoin in mind as the solution. According to the Professor, the global demand for Bitcoin is driven by the desire for freedom, anti-government, anti-regulation, digital, freedom and having a modern flavour to it.

He described the rise of the value of Bitcoin as a beautiful sounding bogus story, as Bitcoin takes on the world and has everyone talking about it. He used the term 'narrative economy' with people not interested in (economic) science but having an interest in human stories, with few understanding how Bitcoin work. The exception being a select group of cryptography researchers.

That is how "Bitcoin was created like, with its own story, very glamorous, hot and to satisfy people's desires.'' In fits with the dominant view that financial technology will change your way of working. During the panel discussion that followed, he reiterated that Bitcoin may sound like a wonderful story, but he drew parallels to the overheated stock market of the 1920s.

Professor Shiller developed many years ago a model to alert to warning signs of an overheated economy and he said, "Eventually, we reach 1929 and that's the year when the the Great Depression began in the US''. He is less sure as to how long the present asset market will keep on running up. He has been sceptical about stock markets being efficient, but he sees that as applicable to certain parts of the markets. However, that market efficiency, according to Professor Shiller cannot be applied to Bitcoin.

Mitigating levels of risk in a constant changing is a major task for economist and Shiller said, "We always have to keep up with finances because the nature of the risks is constantly changing. There is always a need for innovations, and it usually takes a long time because people do not trust change. However, when risk changes, we have to explore ways to measure risk.''

During his opening speech at the conference the Lithuanian Finance Minister, Vilius Šapoka, said that the Government is ready to cooperate with all Fintech and particularly those planning investments. "It's important to focus on such promising areas of Fintech, big data, artificial intelligence, and cyber security," said the Minister. He expressed the hope that the number of electronic payment institutions will triple by the end of next year whilst the number of specialized banks also would increase.

Currently, the Bank of Lithuania licenses 20 electronic money institutions licenses, with 50% of those issued to foreign investors in Lithuania. He saw also improvements in the way that VAT declarations might be processed. Paraphrasing Dr Martin Luther King, he said, "I have a dream that Lithuania will become a high-tech country in the near future, and will call it Litechnia," the Minister invited the conference participants to become Litechnic ambassadors.

Marius Jurgilas, Member of the Board of the Bank of Lithuania, was proud of the Bank's achievements in the Fintech area. "It's just the beginning. We have a plan supported by government institutions and the sector. When there are changes, there are many risks involved. We must be prepared for mistakes, not just to have pleasant conferences. He minimised the high failure rate, ''If you do not try, you will not succeed", said Mr Jurgilas.

In the later sessions, many speakers addressed the disruption that is coming to the financial and accounting field. All boring and repetitive tasks are on the fire line. Among the more notable was a presentation by Bart van der Mark from Cognizant in the Netherlands. He gave a good overview of the changes happening with the field still being dominated by the USA, but that China is becoming a strong challenger in the field of automating repetitive and rule-based tasks.

On a practical level, Frank Versmessen of Belgian based Swift and Sasha Krstic, Head of Mastercard in the Nordics & Baltics gave practical views on how very large global operating and payment systems have adapted to technical innovations. In the case of Mastercard to facilitate payments by consumers, whilst Swift provides a number of technology innovations to speed up payments via on-line banking between the various banking institutions that are the members of Swift. The notion of the 'corresponding bank' has nearly completely disappeared from the banking lexicon.