Lithuanian watermills in the 15th and 16th century: a slow technological revolution 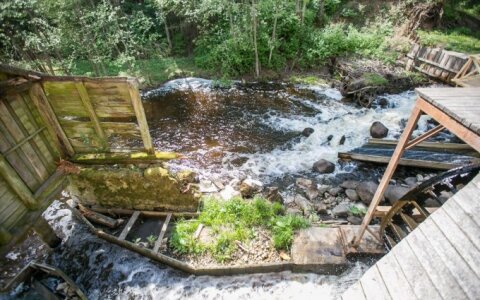 Ancient civilisations already knew how to use the energy of running water, but it was the Western European civilisation that developed a vast network of watermills during the Middle Ages. The abundance of swift-running rivers and constant increase of crop areas in Europe were the two important factors behind the spread of watermills that eventually got involved in various technological processes, including smithing, papermaking, wood processing and groundwater regulation. In technical sense, history of Western watermills apparently developed independently from the experience of other civilisations, although the initial impulses might have arrived from elsewhere.

Ancient Greek and Roman civilisations introduced essential innovations in watermill technology. Water wheels and gear trains existed in ancient Greece back in the 3rd century BC. In the first century BC, Romans used vertical water wheels that replaced horizontal ones invented by Greeks. The latte

Lithuanian watermills in the 15th and 16th century: a slow technological revolution