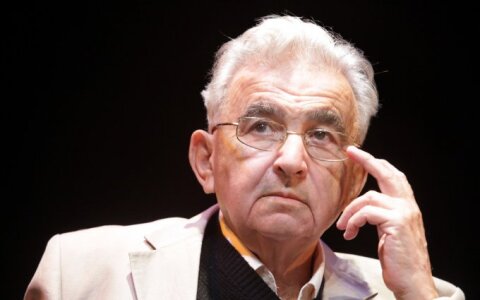 Despite being one of Lithuania’s most prominent writers, winning an array of awards and selling more than a million copies of his novels in Russian, Grigory Kanovich is virtually unknown to English readers.

With a play based on his novels about to open at the Barbican in London and one of his novels published in English, that lack of recognition is about to change for the 88 year old writer, who now lives in Israel.

Related articles
Was there an artistic underground in Soviet Lithuania?
Lithuania: my journey of return

Shtetl Love Song is a moving autobiographical account of Kanovich's life in pre-war Lithuania. The novel focuses on his relationship with his mother and his grandmother. It traces too, the growing tensions – the rise of Communism and the growing anti-Semitism, the Russian occupation and then the German invasion in 1941 which extinguished the world he has so lovingly depicted.

Kanovich was born in Jonava, Lithuania in 1929. It is a miracle that he survived the war. 95% of Lithuania's Jewish community were murdered.

In his novel, Kanovich depicts his family's dramatic escape from the Nazi forces and their Lithuanian collaborators.

At one point the twelve year old Grigory is left stranded with his family at a railway station while the retreating Soviet forces commandeer the trains.

Desperate, and facing down armed soldiers, the Jewish refugees risk their lives, taking over a train reserved for the Soviet apparatchik. It was an action that was to save their lives.

The scene is dramatically retold in Grigory Kanovich's novel, which has previously been lauded by critics internationally. The Frankfurter Allgemeine Zeitung, praised how 'Kanovich makes us feel and see a world that has long disappeared.' While the German magazine Brigitte writes, 'There are very few people who can portray life of the Eastern European Jewish communities like Grigory Kanovich.'