The future of Lithuanian social democracy is cared for 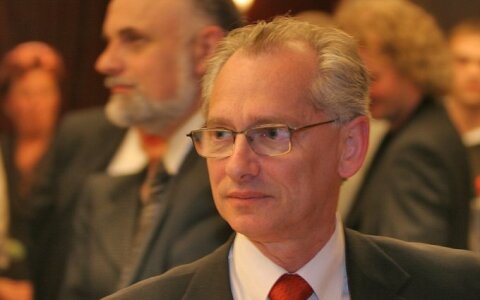 After the former LDDP flank withdrew from the LSDP, a collection of articles asserting concern about the state of Socialist Democracy in Lithuania sprung up in Delfi. The latter concern suggests itself to be honest showing that some intellectuals still realise the importance of the leftist political ideology - social democracy, they heed its pertinence to the Lithuanian standard of democratic and solidarious society. In effect ruling out Rimvydas Valatka's emotional lapse, which - to my surprise - successfully relinquished all applications of fact.

It is strange to see a clear-headed liberal actively disparaging social democracy at large. Strange indeed, knowing that 13 000 Lithuanians already emigrated to Sweden, even more having emigrated to Norway and Denmark. These are countries in which the welfare state would be unfathomable without social democracy. How many scandinavians have emigrated to Lithuania, except - of course - for the honorable Jonas Ohmanas? Markedly, there's something really wrong with the Lithuanian form of liberalism. Politologist Liutauras Gudžinskas already produced a professional and balanced answer to R. Valatka. Hence, I will not repeat it.

Related articles
Leftist manifesto: life would change for both employees and oligarchs
A. M. Brazauskas’ old guard and their true faces

Then again, the question of whether the political parties that are solidified on clear-cut ideologies are dying out, is noteworthy. Though, as philosophy student at San Francisco University, Tadas Vinokur accurately remarked: "Sacrifice is simply impossible when there is no ideology to sacrifice one's life for". (Lacanian analysis of Blade Runner, 2017). Before delving into the discussion of to be or not to be apropos ideologies - ever more fittingly in the wake of the fourth industrial revolution - I will expound on Indrė Makaraitytė's and Monika Garbačiauskaitė-Budrienė's opinions about the dire crisis of the Lithuanian social democracy. To further this point, the pundit Kęstutis Girnius also asserted his views, however, it is impossible to argue with his creative yet factually unsound comments.

To be sure, the said pundits are unified in their questioning: "How real is the Lithuanian left? Will the chairman of LSDP Gintautas Paluckas bring authentic social democracy back to the party which bears its name? Knowing that LDDP old-timers have withdrawn from social democrats, will this cause any danger to Lithuanian politics?

It is impossible to disagree with I. Makaraitytė's account of the LDDP machinery's epic, which - according to her - turned the social democratic party into a humdrum continuation of the Soviet nomenclature. The same nomenclature to which no political virtues exist, except for a rather crude craving for power and authority. As these can be seen in the conflicts between the former nine LDDP members and LSDP. Then again, I. Makaraitytė's reasoned conclusions really do come off as surprising. According to I. Makaraitytė, "in some sense, a real transformation of the epoch is in effect. The players of LDDP apparatus have become obsolete. They don't have the strength required for the fight because their membership is growing rare and their clout is weakening. However, LDDP is deeply affected by a different Lithuanian disaster, namely, the new people, who don't hold any values, no moral scruples, no talents or know-how." Right after she had discussed the final strokes of the already-obsolete LDDP 'apparatus' as well as the blind power-seeking conformism so ubiquitous amongst Lithuanian parties, I. Makaraitytė, at the end of the comment, agrees with G. Kirkilas' narrative, that is, without the Soviet apparatchiks in power Lithuanian government's stable operation is coming to a close. To put it simply, Lithuania is in danger. How should one comprehend such a salto mortale of logical thinking?

Did I understand correctly, the "guaranteed political stability" should be left untouched while the discreditation of social democracy, political corruption and nepotism should be allowed to continue? Not to mention I. Makaraitytė's all-permeating pessimism, which assumes that the withdrawal of LDDP old-timers will in turn "bring about another disaster". It behooves the observer: what is the reasoning behind such an apocalyptic view?

Some objective insights on the matter of to be or not to be apropos Social Democracy in Lithuania were presented by Monika Garbačiauskaitė-Budrienė in her article "Who will take the place of Social Democrats?"

The title itself confirms the commonly known fact that after the restoration of Lithuanian independence social democratic party in Lithuania was non-existent. The name LDDP had allowed the old nomenclature to continue their murky traditions within the wild tides of liberal market. Granted, it is a fact that the gravity/significance of Lithuanian statehood and independence within the western structure was a reciprocal aftereffect of the soviet - communist - nomenclature, which turned into LSDP. Be that as it may, due to the politics cultivated, which were everything but social democratic, it is unsurprising that we have serious problems with social justice - poverty, income inequality as well as subsidies to big businesses coming out of worker's pockets. According to M. Garbačiauskaitė-Budrienė,"If the Lithuanian leftists would've kept up with their left agenda, most likely, the phenomenons such as the solidification of trade centers within city centers and - and in effect - exclusion of small businesses, would've been amortised. Even though the appearance of trade centers is not a bad occurrence in and of itself, it was stimulated in bulldozer-like ways - by rightists and leftists alike."

It falls upon me to reiterate that the terms 'leftists' and 'rightists' in Lithuania are still quite qualified. Hence, when talking about the restoration of authentic Social Democracy in Lithuania, it is unsurprising that the scepticism towards this topic holds serious bedrock. For example, the functionaries have never disappeared from LSDP circles. The same functionaries who - from immemorial times - fostered fear within the party, cultivated careerism, conformism and tolerance to nepotism. A different question arises: are there any intellectuals left within the party who would be able to devise a social democratic - not marxist - party program? A program that would be altogether different from Green-Peasant party's sometimes rightist, sometimes leftist politics of Tadas Blinda. In order for the renewal of party politics to take place it is necessary to reform - from the ground up - the management structure of the party by replenishing it with people who understand the ideology of social democracy. Furthermore, the said new people ought to be united in their party outlook and not in their undertaking to serve self-interest. It was shown already - by the LSDP ethics and procedures commission's capacity to assuage conflicts - that such unity is possible. This was also unequivocally articulated by the the position of the LSDP party sectors, which were, through their representatives within the council, united in the belief that the party needs to be reformed. Therefore, the discussions about Gintautas Paluckas' personal conspiracy to overturn the LSDP do not hold any factual basis. Such attitudes that are held by certain people, merely manifest their total disregard for people's opinions and an overall inability to transcend the caustic authoritarian games of Lithuanian politics. Even if G. Paluckas - for some reason - would fail to deliver, he nonetheless has already opened the doors for the party's inner democracy. As such, the doors are unlikely to close. The society is aware of the latter and, polls show, the party remains the third largest in Lithuania. For this reason, there is no basis under which one could claim that the withdrawal of LDDP old-timers caused a fiasco within the party's overall image. On the contrary, the LDDP's desire to present themselves as true Social Democrats - by naming their parliamentary faction "the social-democratic labour faction" - is a pathetic attempt to continue their dishonest politics through bogus, ill-fated social-democratic shenanigans. This is even more apparent when bearing in mind their non-social-democratic policy and its negative consequences to Lithuanian society.

Finally, with regards to the myth that is already being created, alleging that after the fourth industrial revolution political ideologies are doomed to die out. This opinion is as flawed as philosopher's Francis Fukuyama theory about the end of history. He claimed that the socio-cultural evolution of humanity has ended and it will be replaced by an endless and unchanging political and social space. However, as long as the social, economic, cultural and political inequalities shall persist, the political ideologies will accompany those as well. For example, even though members of the Green-Peasant party claimed - at least before the election - that they are not politicians, that they are professional technocrats, it is nonetheless absolutely obvious that the party is caught up in ideological hodgepodge. That such ideological discord is acceptable to - at least - a portion of Lithuanian electorate is very apparent when considering their presidential favourites, first three of which being a policeman, a businessman and an economist. One bears an imperative to ascertain - as far as the ideals and intellectuals in Lithuanian politics go, there's a severe shortage of both. People simply identify government as a warden of their domestic conditions, from the concept follows that poverty in Lithuania dictates political and cultural agenda.

Will the recovering Lithuanian social democracy have the capacity to rejuvenate the idealism and undertake the all-inclusive implementation of the welfare state and will social democracy be viable at all - the future will undoubtedly show us.

The future of Lithuanian social democracy is cared for