Vanagaitė confesses about her new relationship: her new significant other is the well-known Nazi hunter E. Zuroff 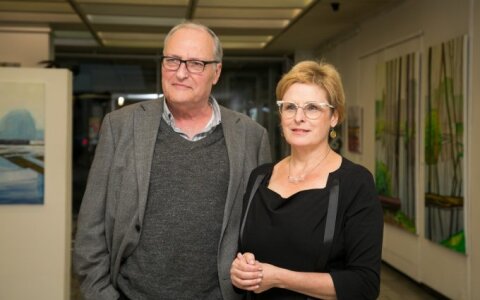 Rūta Vanagaitė was accompanied by Efraim Zuroff to the signing of her autobiography Višta Strimelės Galva on Thursday evening in Vilnius. R. Vanagaitė admitted to DELFI her one year long relationship with the Simon Wiesenthal centre's director and so-called angriest nazi hunter E. Zuroff.

"A little more than two years ago, while writing the book Mūsiškiai, I risked and went on a journey with an enemy through the locations of mass murders. E. Zuroff was the long term enemy of all of Lithuania, hence my enemy as well. However during the journey through Lithuania it turned out that this enemy is an intelligent and deep person, a true friend. The journey through the locations of mass murders ended, the book was published and a year later unexpectedly another journey began. The journey of life together.

Will I leave Lithuania for the most interesting, most electrified city in the world – Jerusalem? The city where the sun always shines and guns are always loaded... Let me answer with a quote from my latest book: "How long can I be without you, my rain swept Motherland? Without your heavy clouds?... I was born with rubber boots."

I heard that in Lithuanian officialdom they say that Vanagaitė finally reined in Zuroff and now he will cease criticising us. Not true. E. Zuroff is uncontrollable. But I like uncontrollable people, I am one myself after all. As for Zuroff, it turns out he is one of us, a Litvak. One pair of his great grandparents is from Linkmenys, another – from Šeduva. Zuroff's grandfather's bones lie at the bottom of Lake Linkmenai, while his grandfather's brother's family is buried in the Paneriai pit. Thus I have good news for Lithuania and bad news for the anti-Semitic Lithuanians – the Jews are e#returning!" R. Vanagaitė told Delfi.

E. Zuroff is not overly popular in either Lithuania or Israel due to his principled position. Several years ago E. Zuroff and R. Vanagaitė travelled through the locations of mass murders of Jews in Lithuania, interviewed Lithuanians who participated and were witness. The journey gave birth to the book Mūsiškiai.

E. Zuroff: the Lithuanian people will be shocked

E. Zuroff said that during his journey through Lithuania for writing the book with Rūta, there were tensions. Her relatives participated in the holocaust, while his family was murdered. As such there was need to overcome naturally existing barriers. He said that he was fascinated by R. Vanagaitė's book, her work and her courage. This motivated to work together and brought them close.

"I know I am not well liked in Lithuania, but I live my own life and do not seek popularity. I work with what I feel I have to do, being a Jew and a historian. I have dedicated by life to holocaust studies and teaching about it, I am trying to achieve justice. I believe that this news will shock the Lithuanian people," E. Zuroff spoke about the revealed relationship, though noting that these are private lives and they are not celebrities, revealing their private lives and seeking to be talked about in the media every day.

The book unveiling at the Artist Union Gallery happened during a difficult time for R. Vanagaitė. On Wednesday R. Vanagaitė announced to the LRT.lt portal that she had gathered scandalous facts about Lithuanian officer and freedom fighter leader Adolfas Ramanauskas-Vanagas. The freedom fighter was supposedly a KGB agent and the head of the Simon Wiesenthal Centre in Jerusalem director E. Zuroff supposedly has even gathered data on the mass murders of Jews.

This statement by R. Vanagaitė has been met with universal condemnation and anger. Arvydas Anušauskas, a historian and parliamentarian stated that R. Vanagaitė is probably unfamiliar with either forgeries or attempts to smear an individual. The author's claims surprised the director of the Lithuanian Genocide and Resistance Research Centre Birutė Burauskaitė as well.

"One thing is what she interprets out of context and another is what historians see after studying all the circumstances. We always see everything based on a certain chronology, consider the situations, the situation of the person's family and such. Now she pulls on every little detail to smear that person? What does this show? It shows that R. Vanagaitė does not like this person being honoured.

R. Vanagaitė took this up and now needs to find something to prove it. What sort of person is she, to now make such claims about the things which our historians have studied well and know the overall circumstances of?" B. Burauskaitė asks.

Sticking to her story regarding A. Ramanauskas-Vanagas

However the author is not standing down regarding A. Ramanauskas-Vanagas and is unafraid of the condemnation and criticism.

According to R. Vanagaitė, all Lithuanian historians look through the same material, but read it selectively – picking what does not match the person's heroism and claim that the inconvenient detail was obtained through torture or is fabricated. According to her, this was confirmed by a number of historians, whose names she cannot reveal.

"This is manipulation of history, which was present in the Soviet era and which continues now, this is history policy, not history. I believe that Lithuania is a sufficiently mature state to review its history after 27 years, what it was and those heroes perhaps broke down, betrayed other people under torture or not. A. Ramanauskas-Vanagas betrayed all 22 people who hid, addresses and names. We should at least know this, ask why," R. Vanagaitė said. As a contrasting case she presented Jonas Žemaitis, who betrayed no-one and declared he despises the Soviet Union in his final speech.

According to the author she disagrees with this as a citizen. She explains that such methods were being used in the Soviet era, just black and white now swap places. "When will we mature enough for truth and transparency about everything?" R. Vanagaitė asked, wondering whether we are a brave country or a post-communist state for which only the convenient is good.

The author says she has never been a communist, nor ultrapatriotic – she has been and will continue to be an individual of truth.

Vanagaitė confesses about her new relationship: her new significant other is the well-known Nazi hunter E. Zuroff