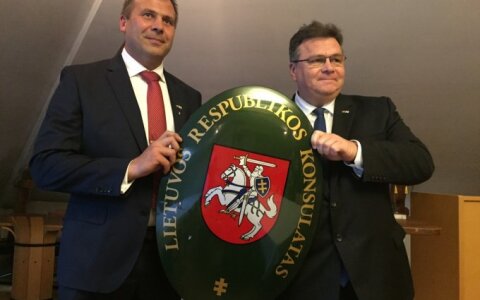 Lithuania's third honorary consulate in Finland was officially opened in the city of Turku on Monday, the Foreign Ministry said on Tuesday.

Foreign Minister Linas Linkevičius said during the opening ceremony that the new honorary consulate "would contribute to the promotion of economic and bilateral ties between Lithuania and Finland", according to the press release.

'Lithuania and Finland, especially on regional level, still have so many open avenues for cooperation in various fields, including advancing commercial, economic, cultural, scientific, educational and other relations, and Honorary Consuls have an important role and part in it.

So, I would like to congratulate Mr. Tomi Taipale on assuming his duties as the Honorary Consul of Lithuania with consular jurisdiction over the region of Southwest Finland and to wish him all success on endorsing mutual interests and further strengthening relations between Lithuania and Finland,' Lithuania's ambassador to Finland Valdemaras Sarapinas said at the opening speech.

Finnish businessman Tomis Taipale has been appointed as Lithuania's honorary consul. Taipale is the CEO of Mamec Oy, a company that develops, manufactures and markets special pumps and industrial agitators.

Turku was chosen because it is the largest city on the southwest coast of Finland and a major seaport in the Baltic Sea region, the ministry said.