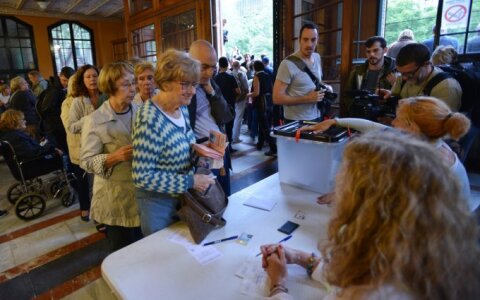 Spain is in crucial need of a dialogue with its citizens, Lithuania's Foreign Minister Linas Linkevičius said following clashes between police and protesters in Catalonia, Spain, over the region's independence referendum.

"Emotianal charge is strong, wounds of mistrust deep,dialogue w own people is a must for Spain . Violence will not help," Linkevičius said on his Twitter feed.

The minister told BNS that the situation in Spain was under close scrutiny. In his words, settling disagreements by force would be a difficult task.

"We could suspect about the use of violence, however, it is very difficult for us to decide, as we are not entirely familiar with the situation. However, the tensions had been mounting for a long time, and the supporters of Catalonia have said they were very emotional, the emotional load was big, and conversations between supporters of a united Spain and Catalonia were obviously not successful. Apparently, there was no constructive dialogue, and now we see the consequences, solving the situation by force will be a hard task, they will need to talk to preserve harmony and possibly the country's integrity," Linkevičius told BNS on Sunday.

In his words, Lithuania has earlier said it would not interfere with Spain's domestic affairs.

"Spain is a democratic country, a member of the European Union and the principle of the rule of law is important, however, we are again saying that excessive force should not be used. This is very important," said the diplomacy chief.