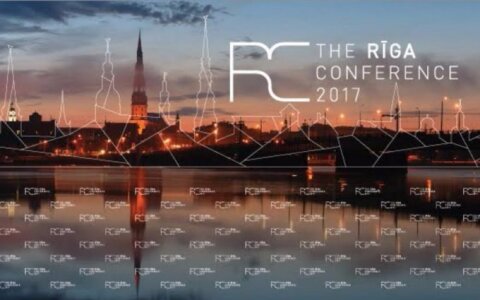 From 29–30 September, the National Library of Latvia in Rīga will host the annual international forum called The Rīga Conference 2017, which is dedicated to foreign policy and security matters. The conference is organised by the Latvian Transatlantic Organisation in cooperation with the Ministry of Foreign Affairs and the Ministry of Defence.

"Each year, since its origins in 2006, The Riga Conference has been demonstrating its growing significance and urgency in the complicated present-day global environment. I am glad that this year, it will yet again be visited by political experts, diplomats and journalists from more than 40 countries. This year's agenda includes matters that are increasingly preoccupying our minds: the role of NATO in the context of international relations, the development scenarios of Russia's future, the Brexit process and its impact on the European Union, and the perspectives of the Eastern Partnership countries. What kind of world will we and the future generations live in? As always, the discussions at The Riga Conference will be dynamic and captivating," says Raimonds Bergmanis, Minister of Defence of the Republic of Latvia.

Related articles
About friends and allies
Riga Conference 2016 – a reflection

"This year, in addition to security and geopolitical issues, The Riga Conference programme includes a very hot topic – the global phenomenon of populism. We cannot ignore the concerns of a significant part of the society, so we have to find a way to ensure efficient security and well-being solutions, whilst preserving our values. It will only be possible when there is a strong tradition of democracy, rule of law and human rights in place in the society, and when the political leaders are committed to them, providing a clear vision for solving both internal and external challenges. I hope that The Riga Conference discussions will contribute to the development of this topic," says Edgars Rinkēvičs, Minister for Foreign Affairs.

This year's guests include the Estonian Minister of Foreign Affairs, H.E. Sven Mikser, the Canadian Minister of National Defence, Harjit Singh Sajjan, the Lithuanian Foreign Minister, H.E. Linas Linkevičius, the Moldavian Deputy Prime Minister and Minister of Foreign Affairs and European Integration, H.E. Andrei Galbur, the Ukrainian Minister of Foreign Affairs, H.E. Pavlo Klimkin, and the Speaker of the Swedish Parliament, Urban Ahlin. The Senior Advisor of the US Department of Homeland Security, Katharine Cornell Gorka, the Vice President for the Euro and Social Dialogue of the European Commission, Valdis Dombrovskis, the Chief Economist at the European Bank for Reconstruction and Development, Sergei Guriev, the Board Chairman of Air Baltic Corporation, Martin Gauss, journalists from The Economist, The BBC, The Guardian, Politiken (Denmark), and The Wallstreat Journal, as well as 500 more participants from 40 countries have also already confirmed their attendance. The conference programme and list of participants are available on The Riga Conference 2017 website: www.rigaconference.lv.

"The forum's main added value is its ability to attract increasingly larger numbers of experts, politicians, entrepreneurs, and journalists with each year. The Riga Conference being a significant high-level discussion, meeting and networking event, has been our biggest motivation to keep organising the conference for twelve years. Meanwhile, the growing number of registered participants and live stream viewers is the best acknowledgement of our work," says Toms Baumanis, Board Chairman of the Latvian Transatlantic Organisation.

The conference discussions will be streamed live both on the DELFI portal and The Riga Conference 2017 website www.rigaconference.lv Viewers are encouraged to participate in the discussions via Twitter, using #RigaConf17. The language of the conference is English. The live stream will offer simultaneous interpretation into Latvian.

The conference is supported by: