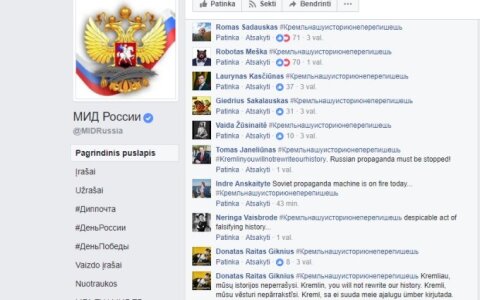 After thousands of Lithuanians responded on Facebook to the Moscow attempts to spread propaganda on post-war guerrilla in three Baltic states, Lithuania's Foreign Minister Linas Linkevičius said that the Russian attempts to interpret history was a constant phenomenon, adding that the civil initiatives on social networks were very important.

"Interpretations of history is one of the ways of Russian propaganda, this happens all the time, and we feel intensification from the Russian side. Of course, we must respond to these things, especially since we have something to say (....). This is an ongoing process, and it is a good thing that