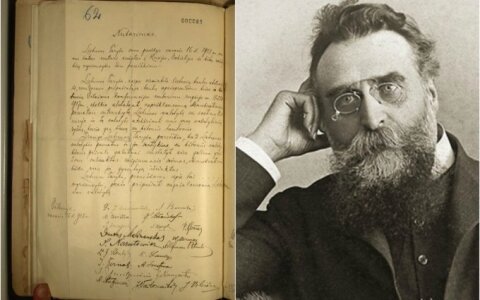 The original copy of Lithuania's 1918 Act of Independence that was found this week in Berlin's diplomatic archives and one of the main signatries of the document Jonas Basanavičius
Foto: DELFI montažas
aA

Lithuanian and German foreign ministers agreed on Friday that an original copy of Lithuania's 1918 Act of Independence that was found this week in Berlin's diplomatic archives will be put on display in Lithuania and that the possibility of handing the document over to Vilnius will be discussed in the future.

"We have agreed that we will be able to display the original document in Lithuania. I think this is good news," Linkevičius told BNS after his conversation with Sigmar Gabriel in Brussels.

According to the Lithuanian minister, they are currently speaking about temporary display, but dates are not clear yet.

Linkevičius also said that he had asked his German counterpart to consider handing the document over to Lithuania and that Gabriel had promised that his country would look into legal possibilities of doing so.

Gabriel on Friday also handed a facsimile of the document to Linkevičius.

Liudas Mažylis, a political science professor at Vytautas Magnus University, found the copy of the Council of Lithuania's resolution of Feb. 16, 1918 on the restoration of an independent state of Lithuania in the German Foreign Ministry's archives on Wednesday.