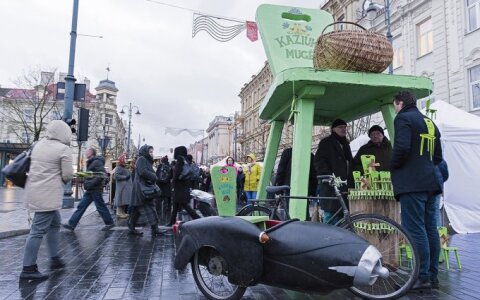 Most of Vilnius downtown is celebrating this weekend St. Casimir's fair (Kaziuko mugė in Lithuanian). One of the biggest events on the Spring calendar, the market transforms the centre of the Lithuanian capital into a giant open-air bazaar.

Just a few days ago, the end of winter was celebrated by burning of the winter witches (More ritual in Lithuanian). Still, temperatures were hovering around the freezing mark for the first day of the three-day market. Many of the warm mitts and hats on offer in several of the market stalls looked right in season.

The annual market dates back to 1827 when merchants in the capital were given the privilege to hold a market. Traditionally St. Casimir is celebrated on the weekend with the Sunday nearest to March 4, the anniversary of his St. Casimir's death.

Saint Casimir (Lithuanian: Kazimieras) lived in the second part of the 15th Century and was a prince of the Grand Duchy of Lithuania as well as the Kingdom of Poland. The Saint became known for his devotion to God and generosity towards the sick and poor. He was buried in Vilnius Cathedral soon after his death he was elevated to sainthood.

Related articles
Kaziuko mugė: 416 years of history alive in the streets of Vilnius

It was during the early part of the 17th century that he achieved a name day, confirmed by the pope in 1602. Processions to remember the Saint started in 1604 and a dedicated Chapel was completed in 1636. Later in that century, Saint Casimir became a patron saint of Lithuania.

Much of the religious background seems a distant memory now. A large variety of mainly Lithuania's culinary delicatessen is on offer, as are traditional handicrafts. There is a bit of nostalgia in the air, but there are also increasingly a large number of very contemporary gadgets on sale.

The market is split up in different specialisation areas. Pottery, woodcarvers, textiles with food stalls interspersed assuring that nobody will go hungry as the smell of greasy spoon specialities alternate various sweets and various types of bread, a staple of every Lithuanian's diet. Street musicians and street artist are keeping the visitors entertained. On several spots, one can also get commemorative coins with historic themes stamped on site.

For more serious numismatic collectors the Lithuanian National Bank sells two special coins. A commemorative minted silver 5 Euro coin and a unique 1.5 Euro made of copper and nickel alloy are offered for the first time in Euroland. The latter is a throwback to a coin that existed in 17th century Lithuania.

The religious celebration is still present as the St. Casimir Archdiocese of Vilnius will celebrate its patron saint. On Friday evening, Vilnius Cathedral saw a performance of Mozart's Coronation Mass. On Friday, 4 March, the Church Heritage Museum offers an educational programme that includes tours.