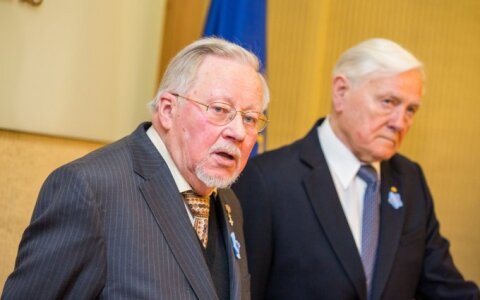 Prof Vytautas Landsbergis and President Valdas Adamkus at the Day of the Defenders of Freedom
Foto: DELFI / Karolina Pansevič
aA

Vytautas Landsbergis, Lithuania's first post-independence leader, and former President Valdas Adamkus were presented with the Freedom Prizes on Friday as the country marks the 26th anniversary of a bloody 1991 Soviet crackdown on its independence drive.

"Vytautas Landsbergis and Valdas Adamkus are the state's architects and builders, the symbols and guarantors of its statehood who substantially contributed not only to the freedom of Lithuania, but also to its security, and who led us into NATO and the European Union," Radvilė Morkūnaitė-Mikul