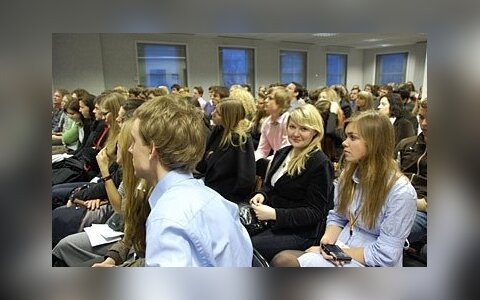 For a decade we have heard repeated stories of foreign companies entering Lithuania and successfully establishing their branches here, but this could become a rarer sight if the country’s demographic crisis is not stymied.

Businesses, who are constantly on the lookout for new talent, hope that the flows of emigration will cease, while talented Lithuanians who have already made a living abroad will choose to return to their homeland. This was discussed in the Global Lithuanian professional forum “Global Lithuania – a code for state progress”. The participants of the forum were professionals who lived abroad, but have returned to Lithuania and are building their lives here.

Where should Lithuania direct its efforts? To attract investment or talents? Will foreign investors be unable to resist the temptation of a country with many talents? Or perhaps first talents should be attracted and investment will then naturally flow in?

Israeli-Lithuanian technology hub action and strategy head Tomas Navardauskas, who participated in the discussion, shared the success story of Israel.

“The phenomenon of Israel as a country is fascinating. The state was made out of nothing in sixty years. During this period they have created a strong and modern country, which presents itself as a country of high technology and start-ups. It was a lengthy process, but the state made decisions, learnt from its mistakes, while doing nothing was viewed as failure,” he said.

T. Navardauskas spoke of the good practice of Israel, where an environment is created that encourages scientists and talents to travel abroad and learn, gain experience, but those who depart are not forgotten.

“They have a database which contains around 4000 scientists with doctor degrees, who live abroad. Every year Israel manages to draw back around 200-300 specialists with doctorates,” he spoke.

Another example of good practice, according to Navardauskas, is the cooperation of state and business, which allows investment into less appealing, but prospective spheres.
Time to establish a talent agency

Public agency Investuok Lietuvoje (Invest Lithuania) head Mantas Katinas agreed that attracting talent is one of the greatest priorities presented to Lithuania in order to maintain investment flows to the country.

“Talent is one of the key reasons why business comes to Lithuania. According to research, 50% of the value offer is talent. Of course talent does not necessarily have to be attracted, it can be nurtured domestically. Nevertheless we have reached a certain ceiling – the attraction of investment is successful, but as a small market we are faced with a new dilemma – the number of talented individuals and width,” he observed.

Katinas stated that Lithuania can no longer simply look to the citizens of the state and the Lithuanian diaspora, it is now necessary to speak of attracting foreigners as well.

“Now is an excellent time to establish a talent agency in Lithuania, one which would have the goal of changing the regulatory environment, so that problems which foreigners wishing to establish themselves in the country face would be resolved,” he said, also stressing that Lithuania, unlike the aforementioned Israel, does not have a database which would gather information about those departing abroad to study.

“The brightest Lithuanian children leave to study in prestigious universities, but currently Lithuania has no database which could show how many such talents we have and where they are. We let those children go and hope that with luck they will return,” the head of Investuok Lietuvoje noted.

After a decade of studies in the USA and UK, Jurgis Pašukonis returned to Lithuania and is currently developing one of the most successful Lithuanian start-ups, the transport routing programme Trafi.

The technology head of the company stated that he interacts much with expat Lithuanians and assured that the majority of them wish to return.

“However the main question is what to do here. It is necessary to consider that if we want people to return, we need conditions to do something interesting and meaningful in Lithuania. For many wages are not crucial. What is most important is meaningful work, challenges, opportunities to improve and develop as a professional. Thus I see two opportunities – either companies that could offer work for returning Lithuanians should already be here or those with more initiative should be given the opportunity to develop their own business,” said the head of Trafi.

J. Pašukonis urged to invest as much as possible into the start-up ecosystem because with more high tech companies in the country, they will attract talent themselves. Also the head of the start-up stated that expat Lithuanians should receive more information: about start-up and youth business financing opportunities, investment funds.

Eleonora Jonušienė who has lived abroad for ten years and is currently employed in the US company Warner Bros spoke of a recently gathered Lithuanian business association on the US West Coast.

“We felt a lack of an organisation linking professionals, so that we could communicate with one another and at the same time with state institutions and embassies. Active professionals have a healthy dose of patriotism,” spoke the participant of the event.

According to her, it is most important that new organisations would have a clear direction. For example the US Lithuanian business association on the West Coast has drawn up two strategic goals – high technologies, life sciences and cinema industry.

The American Lithuanian is sure that through closer cooperation, Lithuanians can attract not only talent to their homeland, but also new investment: “I believe that our talent is creativity and drive. Also persistence. I see similarities here with the Japanese. Our problem, however, is that we do not clearly define our drive.”

She is pained by observing the fractions occurring in Lithuania – if you stay in the country, then you are a “loser”, if you leave – you are a traitor. According to Jonušienė if Lithuania wants to bring its talents back, it is necessary to shed this harmful attitude.

When asked what would lure her herself back to Lithuania, she stated that she is not closed to offers, but wants a more favourable view of Lithuanians who have lived abroad a long time.
“I was looking into possibilities of obtaining a home in central Vilnius, however as someone who has lived abroad for a long time, I am being viewed as a foreigner, which results in higher interest rates. Also clearer information on taxation would be appealing. Of course if you look you can find some information, but its distribution is currently small or inconvenient,” Jonušienė explained.

Not making use of everything

Vice Minister of Economy Lina Sabaitienė, who has lived in Brussels for nine years, was also a participant.

“I worked for Lithuania throughout my time there. It does not matter whether you are an expat or not, at heart we are all in Lithuania. I had the opportunity to remain, to turn away from Lithuania, earn a good wage, but all that time I worked for the country and thought of it,” said the Vice Minister.
She also mentioned that it is important to speak not just of returning Lithuanians who have departed, but also to not forget the talents who have yet to go.

L. Sabatienė admitted there are definitely things that need changing in the country. First of all she proposes to make better use of European Union funding opportunities.

“We plan to review financial means to encourage business, innovation and to make for more appealing conditions for start-ups. Opportunities to receive incentives from Brussels are greater than we have. From my experience I can offer an example. Recently I was in a discussion with representatives of the Copenhagen region. They established an organisation in Brussels based on the principle of cooperation, which contained regional and university representatives, who are engaged in lobbying for innovation programmes. Just in the Copenhagen region around 200 businesses have been launched,” she said.

The Vice Minister of Economy added that it is not the quantity of start-ups and businesses that matters, but what happens with them later on. Thus, she believes, in Copenhagen efforts continue that those companies would interact with science and would be released into international waters.