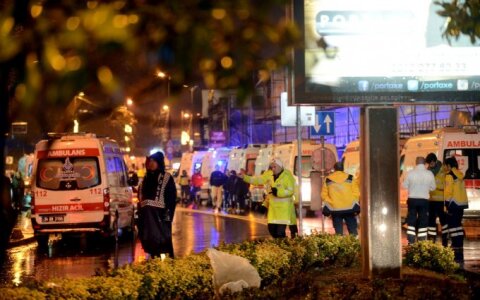 After terrorist attack in Istanbul
aA

Lithuania's President Dalia Grybauskaitė and Prime Minister Saulius Skvernelis have condemned the terror attack that claimed a multitude of lives in Istanbul in early hours of 2017.

"Lithuania denounces the violence against innocent people that cannot be justified by any means and expresses solidarity with the people of Turkey," Grybauskaitė said in her message published by the President's Office.

The Lithuanian president also delivered condolences to her Turkish counterpart, Recep Tayyip Erdogan, and wished strength and fortitude to the victims' families and loved ones, speedy recovery to those injured, as well as unity and consolidation to all the people of Turkey.

Skvernelis conveyed condolences to Turkey's Prime Minister Binali Yildirimu, noting that the attack had not been targetted against Turkey only, as terrorism had no borders. In Skvernelis' words, Lithuania expresses solidarity with Turkey and restates its determination to join the efforts of the international community to fight the challenges of terrorism.