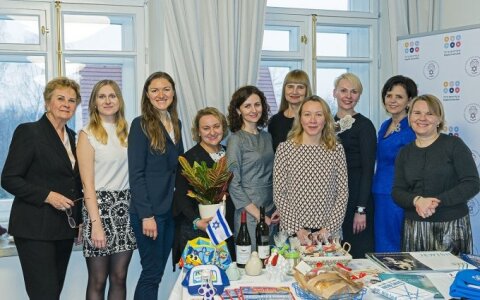 This year's chair of the International Christmas Charity Bazaar is Ethel Cushing, the current Chair of IWAV (International Women's Association of Vilnius). The former Lithuania's first lady Alma Adamkienė and Janina Butkevičienė will be this year's patrons of the Bazaar. Chair Ethel Cushing explained: ''All the benefits will go to a number of charitable organisations that have been carefully selected, a process that took a lot of time.''

Plenty of food and drink specialities in addition to original gifts and crafts. There will be some outstanding ideas for every taste and budget. In addition to the fair's items, there will also be a lottery during the Bazaar. Participants can win valuable prizes whilst supporting a good cause. To entertain the visitors, there will be some traditional dance performances, as well as a choir performing some festive songs. Even a real Finnish Santa Claus will come down from the North Pole and make an appearance at this year's Bazaar!

On 17 November, eight diplomatic representations presented a bit of the flavour of this year's Bazaar at the British Embassy. The host country, the United Kingdom had a number of traditional British Christmas sweets on offer. The Israeli Embassy will again be present after the country participated in last year's successful Bazaar for the very first time offering a wide range of food and gifts.
Italy will present again some fine foods and designer items. Traditional costumed young women for Azerbaijan presented some traditional bread and sweets in addition to jewelry and gifts. Finland will have design items and artisan glassware on offer. The Romanian Embassy, showed wine and liquor that will be sold in addition to toys in Romania's national colours.

India will offer some tasty home-style food in addition to a range of gifts. Georgia will offer some of their wines and gift ideas. The Angel Stand will also return this year as will be traditional decorations.

Just as in previous years a large of staff of the various Embassies and a small army of volunteers will work hard to collect money for a number of needy causes. A number of national dishes and warm drinks will be on offer during the entire afternoon.

In addition to the above countries, Germany, Japan, Turkey, Ukraine and Russia will participate. This year, there will also be a possibly to learn Chinese calligraphy and to participate in a photo contest that best captures this year's Bazaar.

Last year's Bazaar raised 140,000 Euro for charities and hospitals all across Lithuania. This year will try to improve on what was already a pretty impressive result.