Focus on Lithuanian film in Ukraine 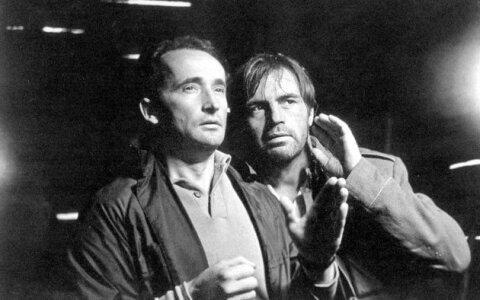 Vytautas Žalakevičius with L. Noreika (on the right) while shooting Nobody Wanted to Die („Niekas nenorėjo mirti“) (A.Zavackio photo)
aA

The 46th Kiev International Film Festival ‘Molodist‘ will begin tomorrow with the participation of Lithuania as a guest country. The programme of the festival will include the latest Lithuanian films and a special section dedicated to the filmmaker Vytautas Žalakevičius.

‘I'm sure that our audience will be happy to accept Lithuanian Focal program as Lithuania in many ways can be an example of how to manage after escape from Soviet Union. And the development of Lithuanian film industry for last five years is an example of efficiency of co-production. Especially interesting is a small ‘In Memoriam‘ of Vytautas Žalakevičius with a world premier of restored Nobody wanted to die, the film that shows very familiar story of national resistance in one of the hardest periods in our common history,‘said Igor Shestopalov, program director of IFF Molodist.

The festival’s guests will also have an opportunity to see the latest Lithuanian films. The programme section ‘Lithuanian New Wave‘ will screen 6 films made in recent years – Kings’ Shift (directed by I. Miškinis, 2016), Peace to Us in Our Dreams (directed by Š. Bartas, 2015), The Gambler (directed by I. Jonynas, 2013), Non-Present Time (directed by Vildžiūnas, 2014), Vanishing Waves (directed by K. Buožytė, 2012), How We Played the Revolution (directed by G. Žickytė, 2011). The films will be presented by the filmmaker Šarūnas Bartas, actors Aistė Diržiūtė and Vytautas Kaniušonis, and producers Jurga Dikčiuvienė and Dagnė Vildžiūnaitė.

‘We are glad to present the all-time biggest showcase of Lithuanian cinematography in Ukraine, which will include both works of our latest authors and classic films adapted for modern screens. We are especially happy about the programme section ‘In Memoriam‘ dedicated to our classic filmmaker Vytautas Žalakevičius, which shows that his personality as well as his works are valued and in demand beyond the borders of Lithuania even after 20 years‘, said Liana Ruokytė-Jonsson, Head of the Department of Film Promotion, Information and Heritage at the Lithuanian Film Centre.
A special publication introducing the films and authors included in the programme was prepared and released by the Lithuanian Film Centre. Its digital version can be downloaded from the centre’s website (www.lkc.lt).

Focus on Lithuanian film in Ukraine