Briefing on the situation in Karshmir 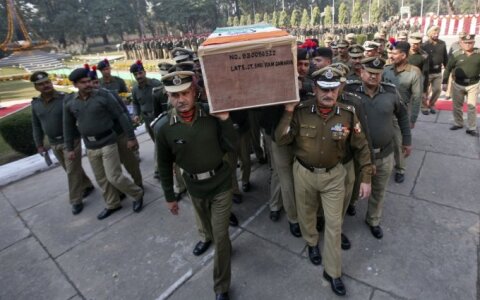 In the wake of the heating up situation at the disputed State of Jammu and Kashmir India’s Honorary Consul Rajinder Chaudhary visited the Ministry of Foreign Affairs of Lithuania on September 29, to brief on the latest developments.

The Honorary Consul said that India at long last decided to take a decisive step on the night of 28-29th September, 2016 when the Indian Army and the Indian Air Force carried out a limited Surgical Operation on the Line of Control(LOC) in its own that part of the territory of the State Of Jammu & Kashmir which is forcibly occupied by Pakistan in what is called POK based on authentic intelligence and the very credible and specific information that some terrorist teams had positioned themselves at launch pads with a aim to carry out infiltration and terrorist strikes across the LOC and in the Metro Cities of India.

According to the Honorary Consul Pakistan has become an epicentre of terrorism where State Sponsored dreaded and outlawed terrorists carry out their sinister crimes with impunity and India has been a victim of the heinous crimes time and again. Just 10 days earlier four terrorists from across the border had carried out attacks on an Indian Army Garrison in Uri in the Indian State of Jammu & Kashmir wherein 18 Soldiers of the Indian Army died and 19 were injured, some very seriously.Earlier a similar attack was foiled in Poonch town by the Indian Security Forces.

The Honorary Consul remained the Lithuanian diplomats that in the month of August 7 such infiltrations and encounters took place and after Uri Attack on 18 September, three further infiltrations of the terrorists took place from across the border but due to the alertness of the Indian Security Forces, they were apprehended and they during their interrogation had confessed to have been trained by the Lashkar-e-Taiba, the dreaded outlawed organisation based on the soil of Pakistan as also in the POK.

At the brief in the Ministry the Honorary Consul reminded that the terrorists from across the Border had attacked the Parliament of India in 2002, the Mumbai Carnage took place in 2008 and earlier this very year Pathankot a Forward Airbase of India was attacked and those involved have yet not been brought to Justice and India continues to await credible action by the Government of Pakistan which continues to remain in the state of denial in spite of the authentic proofs including the finger prints and the DNA Samples as also the recovered Arms and Equipment with Pakistani Markings being made available. This is contrary to the Solemn commitment by Pakistan in January, 2004 to not allow its soil or territory under its control being used for terrorism against India. India has been troubled by the repeated violation of this commitment and has therefore reason to infer that the States’ own machinery is the fountain- head of these intentional acts of Terrorism.

The Honorary Consul expressed his regret that unfortunately a lot of lives of the Terrorists along the LOC were lost during the surgical attack on 28-29 September but India is now determined to ensure the Safety its Citizens, its installations and its sovereign land’s integrity. It was confirmed by India that it is in India’s intent to maintain peace and tranquillity in the region but it cannot definitely not allow the terrorists to operate across the Line of Control with impunity and attack the Citizens of India.

The Honorary Consul Rajinder Chaudhary stated that the Indian Government has been reaching out to the Envoys based in New Delhi including those of the Countries like the UAE, Saudi Arabia and Qatar etc. The members of the Security Council too were briefed at Senior Levels of the Respective Governments. Similarly the Indian Missions based abroad have also been in Communication with the Foreign Ministries of the Countries they represent as the Intent of the Government of India is to seek peace in the region the onus for which lies on Pakistan whereby the Terrorism across the borders must stop first before any reasonable dialogue can be resumed. Indian Leaders led by the Prime Minister have extended repeated gestures to Pakistan to settle all issues bilaterally but not until the Terrorism continues from The Terrorist Camps based in Pakistan and most of all in the Occupied Territory of Pakistan in Jammu and Kashmir State of India which is indeed a rightful precondition.

While the article was in preparation, it is authentically learnt that terrorists from across the LOC have been continuing their senseless intrusions from Pakistan and are firing at the Indian Forces almost on daily basis. The Indian Para Military Forces have given a befitting reply and some terrorists were apprehended and killed in the cross border firing.

Briefing on the situation in Karshmir