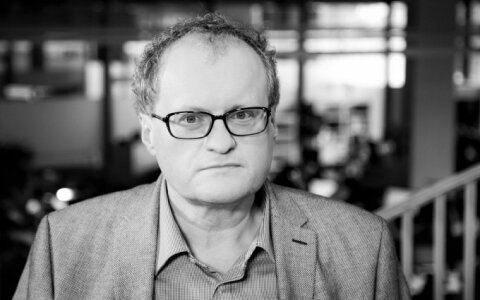 "Lithuania has lost a prominent humanitarian whose academic and public activities actively defended the ideas of freedom and human dignity. Professor Donskis was a strong example of European values and Western thought for the younger generation and all people of Lithuania," President Dalia Grybauskaitė said in her message of condolences.

The president also emphasized that Donskis, as deputy chairman of the Jewish Community in Lithuania and an active member of the community, significantly contributed to the preservation of Jewish culture and spread of ideas of tolerance, equality and respect.

Lithuania's former president Valdas Adamkus says that philosopher Leonidas Donskis was a bright light in the country's science and public life who sincerely cared for evolution of Lithuania.

"It is an enormous loss for the Lithuanian state. I am personally shocked by the loss of a close friend," Adamkus told BNS.

"I believe Donskis carried bright light in the life of Lithuania – not only science, but also in state and public life. He cared for Lithuania's future, his wisdom and advice brought serenity and honesty to our lives. I hope that he left behind an example for the generations to come about how one should live, seek higher objectives and believe in the future Lithuania," he added.

During his brief political career, philosopher Donskis was an active supporter of human rights including rights of sexual minorities, which made him stand out among other politicians from Central and Eastern Europe, says his fellow in the European Parliament's Group of the Alliance of Liberals and Democrats for Europe, Sophia In't Veld of the Netherlands.

"He was a colleague that I appreciated very much. He was very close ally when it came to the fundamental rights and the rule of law. He was also a connection and source of information with Lithuania and the region," said In't Veld, ALDE vice-chairman.

"He was standing up for minorities, also for the rights of LGBT people which wasn't appreciated by everybody. At that time he was an exception that he was so outspoken about human rights that wasn't the topic that other people would be so outspoken about in the region," she added.

Donskis, worked in the ALDE group in 2009-2014. He was elected in Lithuania as representative of the Liberal Movement, however, was not a member of the party.

"With his prominent example and the work he has done, Donskis will always continue to promote the name of Lithuania and remain an inspiration of moral politics to Europe's politicians, academic society and all people of Lithuania," the minister said in a press release.

According to the communique, Donskis passed away before boarding a flight to St. Petersburg where he was scheduled to attend events hosted by Lithuania's honorary consulate. On Thursday, he was planned to present his new book and deliver two lectures at the European University and the Open University.

Faina Kukliansky, the leader of the Jewish Community of Lithuania, told BNS that Donskis who had Jewish roots had contributed to the discussion on the role of Nazi collaborators during World War II.

"He did contribute, he wrote letters to other prominent figures, he had an opinion that was not necessarily supported by everyone. Whether he achieved it or not is a different question. Achieving something in a country, especially for the Jewish Community, is rather hard. Nevertheless, he tried and openly spoke about it," said Kukliansky.

Donskis' father survived the Holocaust in Butrimonys, a Jewish village in southern Lithuania. Donskis dubbed himself as a Lithuanian of Jewish origin. He was vice-chairman of the Jewish Community of Lithuania for some time.

According to media reports, Donskis, 54, passed away at the Vilnius airport on Wednesday morning of what is suspected to be a heart attack.