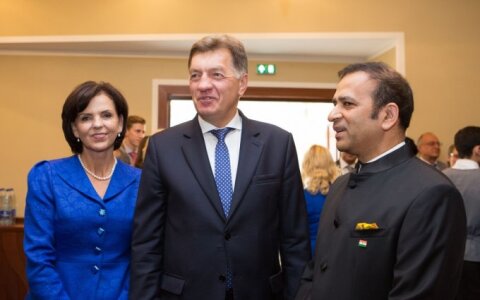 Prime Minister of Lithuania, HE Mr Algirdas Butkevičius, was the chief guest at a grand reception in Vilnius to mark the beginning of the 70th year of India's independence. The reception was also attended by former Prime Ministers, several cabinet ministers and other prominent representatives of Lithuanian government, business and society, apart from the diplomatic corps.

Welcoming the guests on the occasion Ambassador of India to Lithuania, HE Ajay Bisaria, recalled India's March to freedom and journey of seven decades. He pointed out that India's economic reforms were now paying dividends with India becoming the fastest growing large economy in the world as also the most open economy for FDI. Emphasizing the strong bonds between India and Lithuania, the Ambassador spoke of long standing cultural links reinforced by modern political and economic relations.

Apart from special Indian cuisine, the event also showcased Indian dance with a scintillating performance of Kathak by a troupe led by Ms Sonali Sharma. Bollywood made a special appearance with the presence of Indian star Mr Sanjay Dutt and a team of professionals who are exploring locations in Lithuania.