Čiurlionis House in Vilnius: A room with sounds and sights 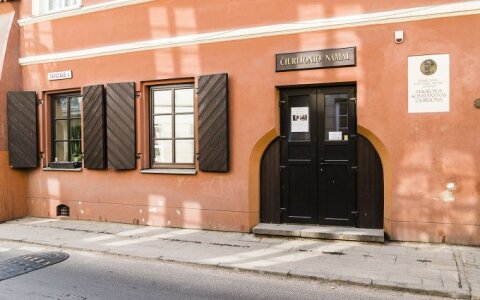 Behind the façade of the well-maintained house on 11 Savičiaus Gatvė in Vilnius lays more than an interesting, equally well-maintained interior filled with photos and documents capturing the spirit of one of its most celebrated occupants, the Lithuanian composer and painter Mikalojus Konstantinas Čiurlionis.

The composer-painter Čiurlionis probably did not need a room with a view. As a self-described 'synthesist', he filled the world with the images he could hear and the sounds he would paint. The sounds and colours cross-fertilised each other in a way few artists before and after succeeded in delivering.

Our host in Čiurlionis House is the pianist Rokas Zubovas, the great-grand son of Čiurlionis. Mr Zubovas is the director of the house. During the conversation, he mentions that Čiurlionis had wide-ranging artistic talents and that his letters and poems demonstrate that he had a very good literary talent as well. He explains that, "Everything seems to have been painted in his colours after Čiurlionis' six month stay in the house in Vilnius". His strong personality touched and influenced substantially many aspects of Lithuanian life.

The house on Savičiaus Street has become a major centre to promote Čiurlionis' life, work, ideas, and legacy. Large photographs and reproductions strike the visitor upon entering. One can visit the famous back room where he lived during his first stay in Vilnius and get a good feel for the small space that was Čiurlionis' abode for a short, but an important time in his life.

"The little backroom is bigger than its four walls," says Rokas Zubovas. It is here that he developed his connections to promote Lithuanian art. It is also in this house that the love with his future wife Sofija started to blossom. There are plans to restore the room to what it looked like in the days of the painter-composer occupying the room. Now there are rotating exhibitions and book presentations and documents and writings related to Čiurlionis' work and life on display in the house. 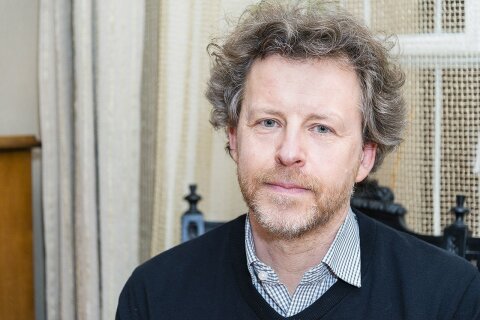 Mr Zubovas and his wife Sonata also fill it with the sounds of music by Čiurlionis and related composers during chamber music concerts where the house piano is the central piece. There are regular exhibitions, conferences and cultural events. Part of the future plans include a virtual reality display to enhance the visitor's experience.

Čiurlionis House also participates and organises Čiurlionis concerts, lectures, and exhibitions outside Lithuania. The Čiurlionis Society, established in 1987, is also based in the house. The city of Vilnius owns and operates the house since its opening in 1995, then celebrating the 120 anniversary of the artist's birth.

Čiurlionis came to Vilnius in 1907, after receiving an invitation in late 1906 to participate in the first exhibition of Lithuanian art, allowing his visual expression of that to be shown for the first time in his home country.

At the time, those speaking Lithuanian in Vilnius were a tiny minority, yet Čiurlionis and his friends set out to put its art and culture back on the map. Vilnius was filled with economic and cultural life, as still witnessed by some marvellous buildings that have survived in the historic downtown and immediate periphery. Inside the town Litvak, Polish, Belarusian Orthodox and the small Lithuanian minority all contributed to a diverse cultural and economic life.

Following the exhibition of 1907, Čiurlionis was part of a group of 18 artists that participated in the founding assembly of the Society of Lithuanian Arts. He was elected to the executive board. It was in the aftermath of the exhibition in the winter of 1907-08 that Lithuania's most famous musical son occupied the back room of this charming house. Nevertheless, it was during this period in Vilnius that he was painting, composing, performing and leading the Vilniaus Kanklės choir. In Vilnius, he also met his future wife, Sofija Kymantaitė, a writer, critic and an activist in the campaign for Lithuanian cultural independence. 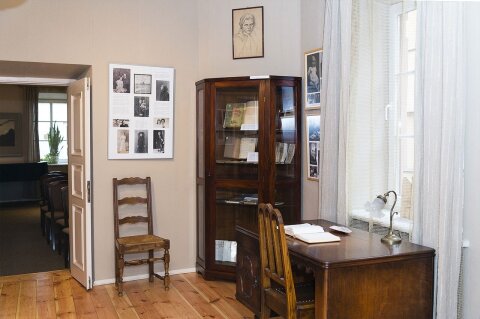 Seated in the backroom of the house, Mr Zubovas provides some insights about Čiurlionis' life and the legacy. Most of the conversation focuses on the musical legacy, as one may expect from a musician. He explains that many of the photos on the wall of the house were made on glass plates, a favourite medium at the time. Čiurlionis also had an early version of Kodak's film camera, believed to be a model 3 that would popularise photography at the turn of the last century. It allowed him to document through photography.

Čiurlionis also wrote a lot during his lifetime, including an unpublished novel "Diary of a Convalescent". Zubovas said, "Čiurlionis' friend had presented it early on to a publisher who had questioned if it had been written by a charlatan or a genius." After his death, all of Čiurlionis' creative output had been given to various friends that each would look after a particular segment of his works. His writings were given to a friend publisher.

Sadly, the novel's manuscript, which Mr Zubovas describes as possibly Kafkaesque, got lost during a fire in WWII with all other manuscripts, stored in the house of the friend-publisher. Therefore, the only written parts that survive are those excerpts that had been written about. Mickiewicz, Dostoyevsky, Nietzsche and Tolstoy had been among Čiurlionis' favourite writers.

The composer never heard his symphonic works performed during his lifetime. A concert organised in St. Petersburg in 1912 was a complete failure, largely due to poor organization and an inadequate transcription of the orchestral parts. The result was a much higher interest in his visual works. The world would have to wait until a hundred years after his birth before the first integral piano works were recorded.

The reader may wonder about the Lithuanian connection and the legacy of Čiurlionis works, as the young boy that grew up going to a Russian language school, mandatory at the time, and spoke Polish at home? Mr Zubovas talks about the Lithuanian lullabies and songs in his childhood. Language being the quintessential element of being 'Lithuanian'. 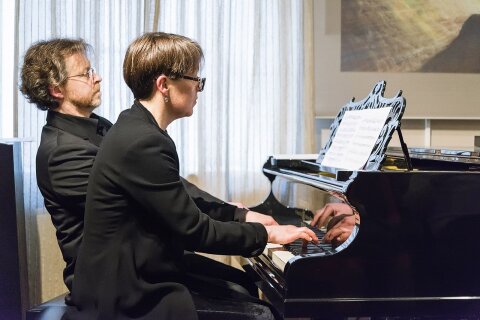 Later in life Čiurlionis composed works based on these songs and arranged them. Then there was the strong presence of Lithuanian nature, a powerful connection to some of his major works. Mr Zubovas explains that on one of his first compositions Čiurlionis wrote (in Polish) 'Lithuanian song', but in reality, it was an Easter hymn, possibly still sung in Lithuanian during that time in church.

In Warsaw, the works of Čiurlionis are very much Polish in style and form. He was composing mazurkas, waltzes, and works inspired by Polish literature, still injecting very personal ideas. Whilst studying in Leipzig with Carl Reinecke, Čiurlionis managed to squeeze in his works some traces of Lithuanian songs. In 1906, back in Druskininkai, the spa town where his parents resided, he had started to arrange some Lithuanian folk songs. He had expressed his desire to "dedicate all his past and future works to Lithuania."

Mr Zubovas says that still today his adaptations are considered the best of Lithuanian folksongs. Demonstrating a deep understanding of these Lithuanian songs and their quality was demonstrated in a thoroughly analysed paper Čiurlionis wrote in 1909.

Čiurlionis was very innovative in his composition, something that can be traced to his Warsaw compositions. In Leipzig, he took a dim view of a fellow student writing in the same tradition of past compositions, rather than bringing in new elements. However, it was, according to Rokas Zubovas, not limited to his compositions; it also demonstrated itself in his paintings and after 1904 in his writings. Increasingly after 1904 he focuses on painting. Čiurlionis' musical compositions were relegated to short intensive periods but they would reflect what he painted earlier. The two art forms were feeding on each other. That would particular be expressed in Čiurlionis Sonatas. 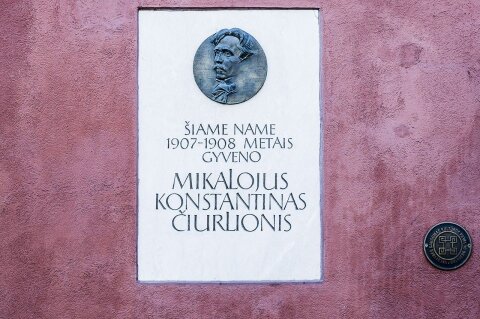 John Ellis Bowlt, British art historian and author, looked at the process in a slightly different way. He describes his painting as ”a search for the 'inner sound' of the universe, evocation of primitive, internal rhythms, experimentation with spatial resolution, depictions of the theme of flight, use of oriental motifs, and abstraction of the physical world into the psychic.”

Čiurlionis' contribution to painting was also delayed in history as most of his works are in a museum in Kaunas, off-limits to most visitors during the Soviet period. It is through the dedication of a Lithuanian intellectual elite that this amazing Lithuanian giant of sound and vision finally found his place in the sun after 1990.

The paintings are now seen as part of the emergent direction in visual arts, that would later in the century flourish under Picasso, Miro, and other icons of European art. In a major exhibition to the American public Čiurlionis' works show alongside Kandinsky, Whistler and Paul Klee in a "Visual Music" fest in Los Angeles in 2005. Exhibitions have taken place in major museums in Japan (1992), Paris (Musée d'Orsay, 2000), Gent in Belgium and many other European countries.

Čiurlionis and his wife Sofija also found their way to the silver screen. 'Letters to Sofija', a biographical feature film starring Rokas Zubovas in the role of his great-grandfather and directed by Robert Mullan in 2012, was a success in Lithuania. An asteroid, 2420 Čiurlionis, is named after one of Lithuania's most famous sons.

Čiurlionis House in Vilnius: A room with sounds and sights