Why Trump is wrong about the costs and benefits of NATO 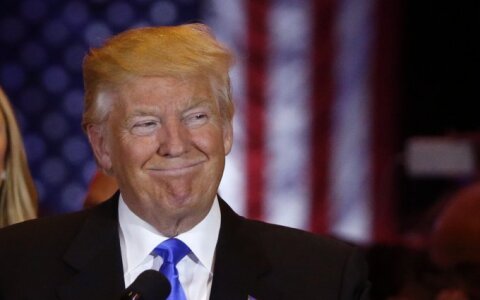 Trump’s explanation of the economics of America’s security alliances misses several core realities, argues Michael O’Hanlon. The benefits of certain alliances can be debated—but they hardly constitute the wholesale drain on American coffers that he has made them out to be.

In his April 27 foreign-policy speech in Washington, Donald Trump leveled a number of critiques at U.S. allies around the world. He began to flesh out his now-familiar critiques of how America’s many allies and security partners—which number about sixty around the world—fail to do their fair share for the common defense.

It is only fair to acknowledge that some of Trump’s arguments about military burden sharing have merit. Most notably, America dramatically outspends most allies on its armed forces. Of course, the United States has the largest economy of any Western ally and thus, rather naturally, the largest defense budget by far. But relative to GDP, its contributions are still disproportionate. The United States spends about 3 percent of gross domestic product on its military. NATO allies are pledged to devote 2 percent of GDP each to their armed forces, but the alliance average is less than 1.4 percent. Only the UK, France, Poland, Greece, and Estonia are near or above 2 percent. Germany is at just 1.1 percent of GDP; Italy and the Netherlands and Turkey check in at 1.2 percent; Belgium and Canada do not even reach 1.0 percent. Yes, some of these countries contribute impressively—more than the United States does, relative to national economic strength—in areas such as development assistance and refugee receptivity, but Trump still has a fair point on this basic and important measure of military preparedness.

On balance, however, Trump’s explanation of the economics of America’s security alliances misses several core realities. The benefits of certain alliances can be debated—but they hardly constitute the wholesale drain on American coffers that he has made them out to be.

First and foremost, counting the United States as well, the broad coalition of U.S.-led Western alliances accounts for some two-thirds of world GDP and two-thirds of global military spending. This situation is exceedingly advantageous to America. Never before in history has such a powerful strategic block of countries been created, especially in the absence of a clear central threat. Of course, America’s allies do not always do as it would wish. But today’s situation is far better than having two or more rivalrous groups of strong countries jostling for position with each other, and potentially engaging in arms races or open conflict.

In terms of military burden sharing per se, other major alliances and security partnerships do a bit better than NATO, on average. In East Asia, South Korea devotes roughly 2.5 percent of GDP to its military. Taiwan and Australia are close to 2 percent. Japan is at 1.0 percent of GDP—but Washington has favored this level for decades itself, out of worry that higher spending could cause counterreactions among East Asian states fearing (rightly or wrongly) a return to Japanese militarism. In the Middle East, most of America’s security partners spend well over 5 percent of GDP on their militaries—for example, 6 percent for Israel, and more than 12 percent each for Iraq and Saudi Arabia.

The United States does not squander huge sums of money basing troops on the territories of its wealthy allies. The United States may spend $10 billion a year at most basing forces in key industrial or Western states—Japan, Korea and Australia in the Pacific region; Germany, Italy, and the UK in particular in Europe. That is only 2 percent of the defense budget. And of that $10 billion, half or more is paid by the host nations themselves. (The situation is different in places like Afghanistan, where specific crises or conflicts have led to more recent deployments of U.S. firepower, and where foreign basing is in fact quite expensive.)

Foreign basing of American forces can often save the United States money. For example, homeporting an aircraft carrier battle group in Japan obviates the need to have perhaps three more carrier battle groups in the U.S. Navy’s overall fleet (at an investment cost approaching $50 billion) to sustain the same level of presence in the broader western Pacific region. U.S. airfields in Germany facilitate deployments to the Middle East and Afghanistan; the alternative to such bases could well be a need for huge additional numbers of refueling aircraft.

Returning to the original argument: Trump is indeed right that the United States spends a great deal of its large defense budget to defend allies abroad. It is tough to attribute specific amounts to each region, because America’s military forces are flexible. Most are based in the United States in peacetime; most can swing east or west in times of need. But in broad terms, it is not unreasonable to divide up America’s $600 billion defense budget today into roughly four major categories: central defense needs (such as research and development, homeland security, global intelligence assets and operations), forces for Europe, forces for the Asia-Pacific and forces for the broader Middle East. This logic should not be taken too literally, but one could apportion roughly $100 billion to $200 billion for each of these four main purposes of U.S. military power.

In theory, Trump could propose eliminating the forces and defense expenditures that America devotes to any of these key strategic regions where local allies do not wind up doing their fair share, as he has insisted they must. With such a bold stroke, for example, one could imagine pulling the United States out of NATO and reducing the $600 billion annual defense budget to something less than $500 billion. However, Trump says that America’s military should be built up regardless of what happens with these various key alliances, arguing that spending on the nation’s armed forces is one of the most appealing possible investments the country could make. I tend to agree with that latter point—but it contradicts the earlier proposal to scale back U.S. defense spending for any region that shirks its own duties.

The verdict is simple: Trump raises a couple of valid specific critiques about alliance burden sharing in the world today. But he gets several specific points wrong, and misses the big picture: on balance, America’s alliances help this country to undergird a global security system that has dramatically reduced the prevalence of interstate war in modern times, while currently costing the country only 3 percent of its gross domestic product. To paraphrase Trump himself, this is a very good investment—and one that the U.S. global system of alliances and bases does much to make possible.

This article was originally published on The National Interest. Republished with permission from Brookings

Why Trump is wrong about the costs and benefits of NATO