Parties clash on how to improve business environment in Lithuania: More of the same or a new course? 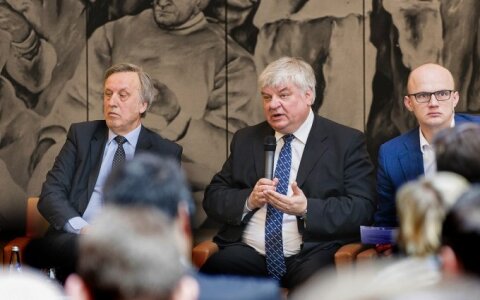 The British Chamber of Commerce, along with their colleagues from the Estonian, German-Baltic, Danish, Finnish, and Norwegian Chambers, hosted a breakfast meeting where leaders of Lithuania's five main political parties gave their views on how to improve business environment in Lithuania.

After a short introduction by Frank Heemann of the German-Baltic Chamber, journalist Edmundas Jakilaitis moderated the presentations and the discussion hosted by the Hotel Kempinski.

It some respects it is still early days in the political campaign of the 2016 election for the Seimas (Lithuania's parliament), but the debate and presentations of various views at this breakfast meeting showed how slowly some much discussed issues are heating up.

Each of the parties made a short introduction with Gabrielius Landsbergis representing the Conservatives, Rimantas Vaitkus introducing the views of the governing Social Democratic Party, Gintaras Steponavičius as the Liberal Movement's spokesman, and Povilas Gylys speaking for the Order and Justice.

Both liberals and social democrats accused the conservative members of the Seimas for blocking reform, particularly in reforming the Labour Code. While a lot of finger pointing went on, Rimantas Vaitkus said that his party was still discussing many of the issues and that on 1 May they would present their views for the next legislation to the Lithuanian public.

All agreed that an education reform was needed as it represented an important element of the country's future. However, the parties differ in many respects as to how go about optimizing the use of resources and avoiding duplication.

The tone of the debate sometimes left the listener wondering who was the opposition and who was in power when the moderator addressed education, corruption, healthcare, and economic policies of the various parties.

Collective versus individual responsibility seems to be the dividing line between the conservatives and liberals on the one hand and the government parties on the other. Estonia was often cited as an example for how to address problems ranging from co-pay for medication to medical services and unemployment.

Povilas Gylys found inspiration in the Danish model of providing the weaker in the society with a safety net. He said that all parties had socialists in their midsts, but "some socialist believe in God".

Although the country has made many inroads in dealing with corruption, particularly in law enforcement, it remains a sore problem in healthcare and even the judiciary. Estonia and even the USA were cited as possible inspirational sources to solve these issues.

A question on international trade has also elicited different responses from party representatives. Exports to the neighbouring Nordic countries would be a priority for the Conservatives, while social democrat Vaitkus cited meat exports to the USA as a sign of Lithuania's progress in diversifying its export markets.

All the parties agreed Lithuania needed educational resources in order to develop high-added-value intellectual products, but offered a cornucopia of solution.

It will be interesting to see how the issues will evolve over the coming months leading up to the elections in October.

Parties clash on how to improve business environment in Lithuania: More of the same or a new course?