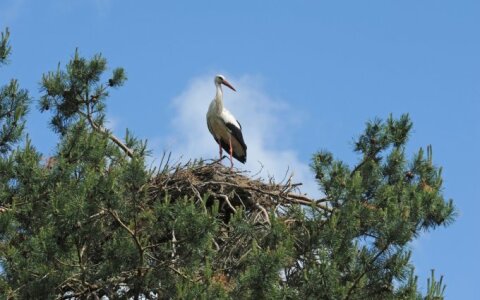 If you're feeling pangs of longing for Lithuania's historic cities and beautiful countryside, there's a site that invites visitors to view live feeds from various points of interest throughout the country. Now that spring is coming in Lithuania, arguably the most popular feed out of those available – a stork family's nest in the village of Naisiai – has livened up once again now that the family has moved back in.

The site, provided by the Bitė wireless service provider, includes live feeds from Vilnius, Kaunas, the Nemunas river, and other points throughout Lithuania. Many Lithuanians, however, have been captivated by the close-up view of the stork's nest.

It is a traditional Lithuanian belief that stork nests bring good fortune, so many village homes have wagon wheels or other structures erected on poles to provide storks with favourable nesting sites. Storks spend their winters in African savannah lands.

It was Ramūnas Karbauskis, the current leader of the Peasant and Greens Union, who came up with the idea several years ago. “I once noticed how a group of children were running around the post [below a stork's nest] and asking one another who was in the nest and what could be happening up there," he said. "What child doesn't want to discover as many secrets as they can? That's where the idea came to install a webcam there. Now the children can go online and, at any time, see how the storks live up close. The camera works all year, so as soon as the smell of spring arrives, the children start waiting for the storks, logging on every half-hour: have they returned yet?”

To check in on the stork family, click here (if they aren't home, click on "Laiko Panorama" for a selection of video clips from the feed or "Nuotraukos" for a photo gallery from the feed). To browse other live feeds, click here.

(Note: For viewers in the US, keep in mind that there is a significant time difference between Lithuania and the US, and that if the screen is dark, you may be tuning in at night)