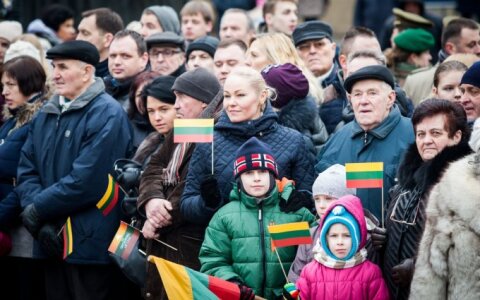 Lithuania celebrated the Day of Restoration of the State on Tuesday, commemorating the 98th anniversary since the nation declared independence from the Russian Empire on February 16, 1918.

Commemorative events, concerts and traditional bonfires were planned across the country.

In the morning, President Dalia Grybauskaitė presented state awards to several dozen Lithuanian people and foreigners, and the Lithuanian National Culture and Art Awards were presented in the afternoon.

At midday, flags of the three Baltic states were raised in a solemn ceremony on Daukantas Square outside the Presidential Palace, followed by the president's speech.

Sixteen symbolic bonfires were lit on Gediminas Avenue and a concert took place on Cathedral Square to celebrate the events.

The February 16th celebrations were also marked in Lithuania's other major cities, including Kaunas, Klaipėda, and Šiauliai.

Related articles
Should we celebrate or mourn on February 16th?
Obama on independence day: 'Lithuania continues to serve as a model to others'  (1)

On February 16, 1918, the Council of Lithuania declared Lithuania an independent and democratic country with Vilnius as its capital.