Sand sculpture commemorating January 13 made by artist in California 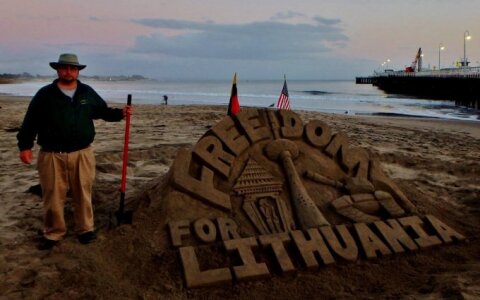 On Thursday, Bill Lewis, a sand sculptor based in Santa Cruz, California, shared a photo of a sand sculpture on Facebook that he made to commemorate the events of 13 January, 1991 in Lithuania.

“This sand sculpture was made to commemorate the events in Lithuania, 25 years ago,” Lewis wrote on his Facebook page. “My family came from Lithuania, so I wanted to honor those who sacrificed for freedom.”

On his Facebook page, Lewis also went into detail about how he made the sculpture; “The sculpture was made from just sand and salt water. Tools used were common yard and house tools, such as a shovel, rake, buckets, garden sprayer, masonry trowel, utensils, spatulas, and brushes. I also made the Lithuanian flag, since I could not find one of the right size. The American flag is there because this was in America and America supports Lithuanian freedom.”

Here is a video of the popular sand sculpture. You may copy, share, or take clips from the video, so long as that is done respectfully. Look in the comments of this post on my page Santa Cruz Sand for some more background info.This sand sculpture was made to commemorate the events in Lithuania, 25 years ago. Lithuania had declared its independence, but Soviet troops invaded. On this date, unarmed civilians defended key government buildings and this radio/TV tower against soldiers and tanks. Many were injured and 14 died. A few months later, most of the world recognized Lithuanian independence. My family came from Lithuania, so I wanted to honor those who sacrificed for freedom. - Bill Lewis

Sand sculpture commemorating January 13 made by artist in California