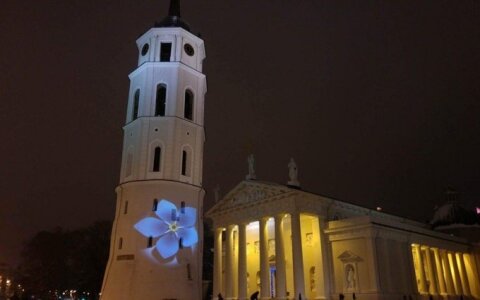 In every country, in every nation, there are days and hours when its will, its unity and courage is tested. The destiny of the whole community is defined at these moments. Those moments reveal what each person is willing to give up for the sake of others, for the sake of freedom, for the sake of independence.

Lithuanians had experienced such a moment 25 years ago. January events took place in 1991, in the aftermath of the re-establishment of Lithuania’s independence. The Kremlin refused to recognize Lithuanian’s independence and imposed an economic blockade on the country. On January 11, Soviet troops stormed the Press Palace where the majority of Lithuanian newspapers had their headquarters.

What happened next was Lithuania‘s non-violent revolution. Thousands of unarmed people gathered near the parliament, TV tower, and the Radio and Television headquarters, creating human shield for protection. One of the parliament’s defenders stated that, “The intention was not to win, because we all knew that this was impossible; the intention was to die, but by doing so to make sure that Moscow couldn’t tell any lies as they did in 1940. To make sure that the whole world knew that Lithuania was prepared to fight for her freedom.” We chose truth to be our ultimate weapon.

The Soviet army refused plans to storm the parliament simply because “there was too much meat”. However, 14 innocent people died and more than 500 unarmed civilians were injured. Their supreme sacrifice and the unity and courage of freedom defenders cleared the path to Lithuania’s independence from the Soviet Union.

On 13 of January we use a Forget-me-not flower as a symbol to mark the Freedom Defenders Day. 25 years ago we came to know the price of the freedom. 25 years had to pass for us to understand the real meaning of freedom. Freedom has not been easy for us. Freedom means responsibility and openness to the truth.

Despite the fact that our country had made a huge progress over the years, we still struggle to fully enjoy and cherish our freedom. Some say it is because the reality is not the one they dreamed for, others simply cannot handle the burden of freedom. But thousands of people put a forget-me-not flower on their chest to make a statement that we accept this gift of freedom and we are thankful for the sacrifice that was made in order to grant it for us.

As a country that experienced a difficult path to its freedom, Lithuanians find the events in Ukraine to be very concerning. The battle for freedom has already become a memory for us, but for Ukraine it is a living reality. We heartily share our experiences with Ukrainians in their struggle for true independence, but the main lesson to be learned from our history is very simple – the truth, not the guns, is the ultimate weapon to fight for freedom. Therefore, only Ukrainians themselves are able to create a truly free country. They have the courage, what is troubling is their lack of unity. Ukrainians need to stay strong and wise. The Lithuanian case serves as a proof that what seems impossible might be actually achieved. We put our hopes for a peaceful turn of the situation in Ukraine.

Freedom has its price. It took half a century for us to rise for our freedom, but we never abandoned the dream of freedom. We fought hard. We remember why we are free. We accept this gift and take on this responsibility. We are here to make our country’s history that we love to make. We are here to continue its story.