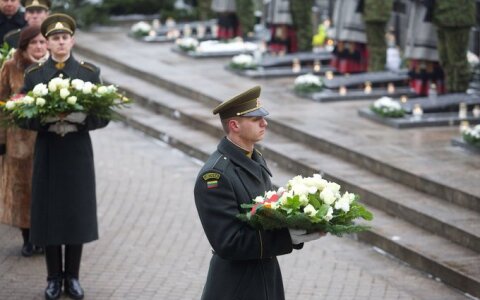 Presidents of Georgia, Ukraine and Estonia have congratulated Lithuania on January 13, when the country celebrates the 25th anniversary since it defended its independence from Soviet forces.

Georgian President Giorgi Margvelashvili wished Lithuania prosperity and said that participants of the January 13 events proved that nothing can stand against the spirit and inspiration towards the independence and sovereignty.

"Today is the 25th Anniversary of the Defence of Freedom of Lithuania, the day that became the symbol of the struggle for Freedom and Statehood.

"Georgia honours heroes and pays tribute to the souls of those who devoted their lives for freedom as their highest value. Georgians and Lithuanians struggled for independence and statehood with unity; we still stand together with our Lithuanian friends to create bright future for the generations to come," the statement of President Margvelashvili reads.

On January 13, TV tower in Tbilisi will be illuminated in the colours of the Lithuanian flag.

In his official Facebook account, Estonia's President Toomas Hendrik Ilves paid tribute to victims in the fight for Lithuania's independence.

"On this day twenty-five years ago, 14 Lithuanians defending the TV tower and the Television and Radio building in Vilnius were killed by Soviet troops. Let us stop and think about those brave souls who died to defend a free Lithuania. Let us think how far we in the Baltic States have come in a quarter of a century, as democracies, as members of the EU and NATO. The life we live today is a memorial to those who fell in Vilnius," the Estonian president said.

In his letter to Lithuanian President Dalia Grybauskaite, the President of Ukraine Petro Poroshenko spoke about his "highest regard" for the Lithuanian people who stood against the Soviet occupation.

"I am very pleased to say that Ukrainians, too, joined in during those crucial days to protect the independence of Lithuania", the letter says.

The Ukrainian president thanked President Grybauskaitė and Lithuania for their support during the "Revolution of Dignity" in Ukraine and the current fight for the country's territorial integrity.

In January 1991, Soviet forces attempted to take control of Lithuania which had declared independence from the USSR a year before. Fourteen people died and hundreds were injured in Vilnius while defending key institutions from Soviet tanks.