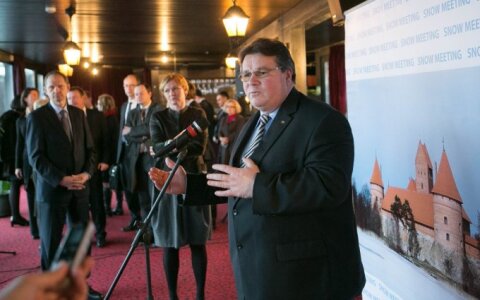 The traditional Snow Meeting, an informal gathering of Lithuanian and foreign experts of security policy, is to be held on 14-15 January near Trakai. This year, the meeting will focus on preparing for the NATO summit in Warsaw this July.

The meeting, to be held in Paunguriai, a district of Trakai, will be attended by Latvian, Estonian, Slovakian and Romanian Foreign Ministers - Edgars Rinkēvičs, Marina Kaljurand, Miroslav Lajčák and Lazăr Comănescu – and by the United Kingdom’s Minister of State for Europe David Lidington, the U.S. Assistant Secretary of State Victoria Nuland, the NATO Deputy Secretary-General Alexander Vershbow and the Admiral Mark Ferguson who serves as the Commander of Allied Joint Force Command located in Naples.

About 90 high-ranking NATO and EU officials, diplomats, experts in international affairs and security policy from various think tanks are expected to participate in the meeting.

The ninth annual Snow Meeting will focus developments in the international security environment, key security challenges for Europe, and how NATO responds to these challenges. A separate session will be dedicated to information warfare and responses to propaganda.