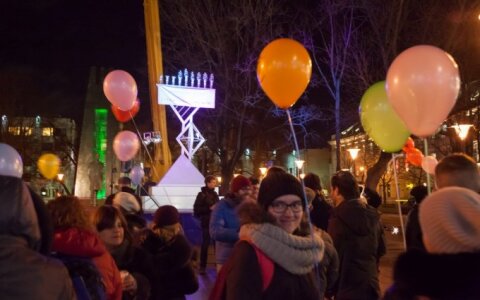 A large crowd gathered on Kudirkos Square to witness Rabbi Sholom B. Krinsky light the Menorah candelabra this past Thursday. With the mayor of Vilnius and the first Israeli ambassador to Lithuania, Amir Maimo, attending, this 22nd Hanukkah event in Vilnius showed that it has grown with the city.

“Hanukkah is about shining a little light into the darkness,” says Rabbi Krinsky.

With little less than an hour to spare before the Menorah lighting, people are still putting a finishing touch to the preparations on Kudirkos Square. Food is being set out on silver trays in a big white t