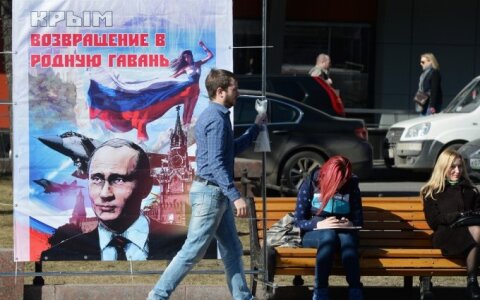 Russia’s euphoric and triumphalist celebration all this week, marking the one year anniversary of Moscow's annexation of Crimea, has already drawn crowds of people, national flags in abundance, and veterans marching in various cities. Meanwhile, Russia-backed militants continue their attacks in eastern Ukraine testing the fragile truce between Kiev and the separatist forces. A year later since Moscow’s foray into Crimea, there is little evidence of Russia is willing to back down or back out of its aggressive campaign in Ukraine. What often gets blurred in Moscow’s nationalist rhetoric is that fact that Russia’s economic and military interests in Ukraine run deep, making Russia’s pull out from Ukraine unlikely in the medium to long-term.

Russia’s interest in Ukraine are centred on energy, military, and the domestic political considerations that run deep and will not be easily abandoned. While Russia has often cited support of its compatriots as its main motive this is little more than a pretext for its greater ambitions in the