Calling on the Berankis Brigade 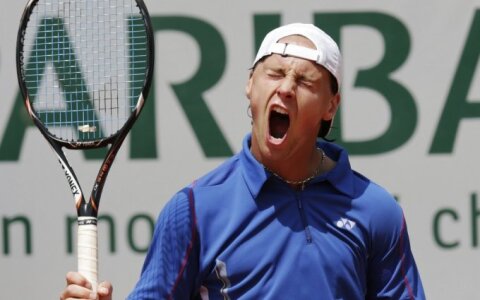 This is a call to all Australian-Lithuanians who wish to join the Berankis Brigade!

Ok, I’ll take a step back as you may already have mistaken this for a combat mission.

Established at an Australian-Lithuanian scout camp in 2011, the brigade is an informal gathering of Lithuanians and friends in support of professional tennis star Ričardas Berankis.

Berankis, 24, will be participating in his 6th Australian Open this coming week and comes off a successful year at Davis Cup level after guiding Lithuania to Europe’s Group 1 for the first time.

The brigade has no age limit, no language requirements and strictly no fees or initiation tasks however enthusiasm for our on court warrior is essential from the first serve.

Previous years have seen Lithuanians from Melbourne, Geelong, Sydney, Brisbane and abroad unite through songs, chants and even body paint while also draped in yellow, green and red.

The group wishes to unite through the same values displayed by our parents during sporting moments such as the Sydney Olympics and the 1987 Marčiulionis-Chomičius basketball tour.

Even the Australian Open has played host to the thrills and spills of the late American-Lithuanian Vitas Gerulaitis (victorious in 1977) and his loyal supporters.

And let us not forget the efforts of our grandparents, the first wave of Australian-Lithuanians; many of which cheered on visiting Lithuanian heroes including Antanas Mikėnas, Stasys Stonkus and Kazimieras Petkevičius throughout the Melbourne Olympics some 58 years ago!

Even if you do not have a connection with Berankis or Lithuania, this opportunity awaits you with arms wide open.

- Berankis, ranked 84th, will be playing Igor Sijsling (Netherlands, 83rd) in the first round.
- The tournament will take place at Melbourne Park on Olympic Blvd next to the MCG.
- Time and exact date will be released this weekend on this link. 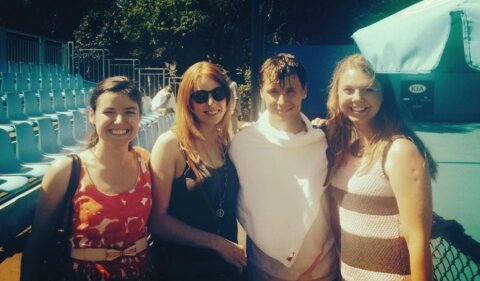 Photo courtesy in 2014 of Alex Tigani.

We hope to see this brigade grow in numbers each match and for our supporters to peacefully invite fellow audience members post-match to join for a group photo!

However the 16-year-old Lithuanian could not hold off the host nation’s Brydan Klein who triumphed 6-1 6-4 in the semi final round.

Four months later Berankis would make his Davis Cup debut for Lithuania against Ireland before rounding out the decade with wins against Bosnia & Herzegovina, Moldova, Egypt and Georgia.

The “Džiugo Tunto Rajoninė Stovykla” in Gilwell Park, Melbourne played host to the inaugural meeting of the Berankis Brigade on the eve of the Lithuanian’s first Men’s AO tournament.

Though Berankis was already famous for having led Lithuania to historic Davis Cup victories over Great Britain and Ireland nine months earlier – see story - few would have predicted both his, and his brigade’s, fortunes at Melbourne Park.

After a hostile straight set victory over local Marinko Matošević, Berankis would face, challenge and force Wimbledon finalist David Nalbandian (Argentina) to retire in their second round match.

By advancing into the third round, to the astonishment of all in attendance, he would record his best result to date at a Grand Slam tournament. 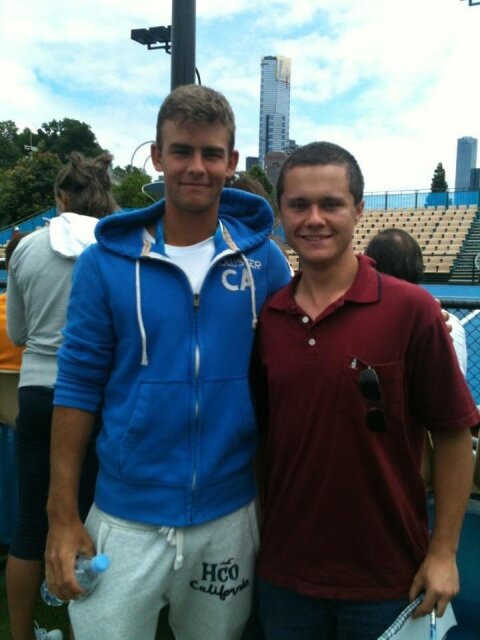 An addition to this new cheer squad throughout the end of Berankis’ campaign was 18-year-old Lina Padegaimate, alongside her mother, Laima.

The Lithuanian teenager had made it to the second round of the Girl’s doubles tournament after combining with Nigina Abduraimova (Uzbekistan).

Though Berankis would be no match for world number-7 David Ferrer (Spain) in a completely one-sided duel, an annual tradition had been set for Lithuanian sports fans down under.

A slip down the world rankings would have denied Berankis automatic entry into the tournament had it not been for his endeavors in the qualifying round.

However a rise in form for his Davis Cup teammate Laurynas Grigelis resulted in a double dose of Lithuanian action for the small contingent of fans on hand.

Initially, Berankis proved to be back to his best when facing off against Fabrice Martin (France).

Sadly, it would not be Grigelis’ day as the 20-year-old Lithuanian surrendered a one game lead against Russian Konstantin Kravchuk.

The following day Grigelis was made an honourary member of the Berankis brigade, joining in support of his fellow Lithuanian.

Yet even the extra support could not guide Berankis against tricky winds, questionable umpiring and a disrespectful opponent in Spaniard Roberto Bautista-Agut (seen spitting).

The action did not stop there for the Lithuanians community as eventual Winter Olympian Agnė Sereikaitė claimed a Silver medal at the World Junior Skating Championships at the Docklands.

Two days after Lithuania’s Olympic sailor Rokas Milevicius and the Ambersail crew entered the Port of Melbourne, Berankis had also returned to town; hoping to claim redemption in the qualifying tournament.

On this occasion Berankis entered the court as a new man, dominating his return serves against Peter Gojowczyk and Paul Capdeville while also coming from behind to defeat Bradley Kahn (USA) in adverse conditions – see story.

The overlapping of another Džiugo Tunto Stovykla would see the brigade’s numbers fade during the main tournament however Berankis’ form would continue to improve. 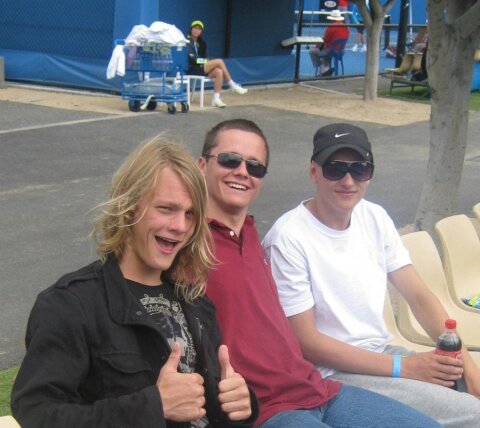 After taking out the first round victory against Sergiy Stakhovsky in straight sets the 22-year-old Lithuanian would back his efforts against German Florian Mayer.

This was a remarkable effort considering that Mayer, ranked 25th in the world, had reached the quarter finals of both the previous Wimbledon and French Open tournaments.

However this could only mean one thing for Berankis, a fixture most of his fans had been dreading… he was to now face world number-3 Andy Murray (reigning Olympic and US Open champion).

Berankis, our little Ričardas who had faced a plethora of on court enemies twelve months earlier, was now a fascination to a crowd of 10,000 at the Rod Laver Arena (main court).

Furthermore, the Lithuanian’s battle with Murray was televised nationwide as commentators dissected Berankis’ physical presence and how he had resembled Australian star Lleyton Hewitt.

As winter followed on in Australia, many of Berankis’ followers would go on to watch him battle world number-1 Novak Djokovic as the US Open was televised internationally.

Though he may not have claimed a set in this match, it would mark the first and only year where Berankis would feature in all four major Grand Slam tournaments.

For a third year in a row Berankis would require a successful qualification tournament.

Thankfully, this would be no problem for the now 23-year-old who sailed through his matches against Gianluca Naso (Italy), Andre Ghem (Brazil) and Andrej Martin (Slovakia) with ease.

Throughout this particular week the brigade was in full force displaying unity in Lithuanian colours, songs, cheers and chants through numbers resembling Berankis’ inaugural tournament. 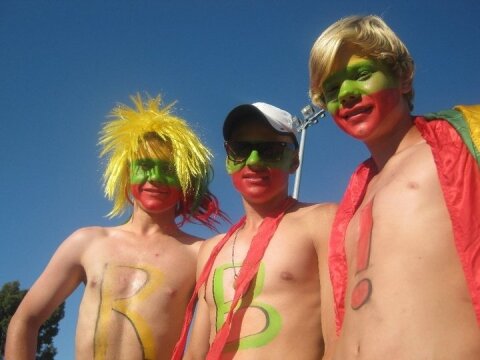 This had given the Australian-Lithuanian community extra incentive to collaborate with their Ukrainian counterparts during a time of armed conflict with Russian forces in Crimea.

That month, members of the Melbourne-Lithuanian community had posed for an online photo in protest of the Russian forces while in Geelong the two ethnic communities held a prayer vigil.

As for the game, Berankis would not win a set and would fail to qualify for any of the three remaining Grand Slam tournaments.

However this year will be remembered for the respect and unity displayed by the brigade; values we can only hope remain as examples for the next generations of Australian Lithuanians.

Calling on the Berankis Brigade