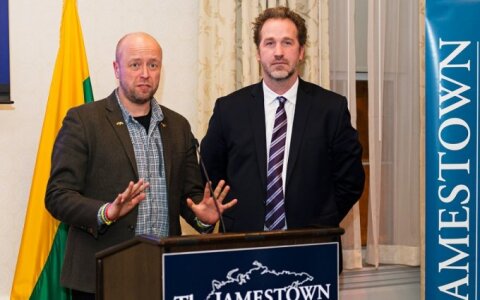 On Tuesday, 13 January, the Lithuanian community and a large number of American guests commemorated in Washington’s University Club the day in 1991 when the Soviet army attempted to overthrow Lithuania's legitimate government in the aftermath of the collapse of the Soviet Union. The attendants paid tribute to the 14 people killed and the over one thousand unarmed Lithuanian civilians injured when the Soviet army and Special Forces attempted to overtake the Vilnius TV Tower and the Lithuanian parliament – the Seimas.

The Invisible Front, a movie about Lithuanian freedom fighters or partisans that operated in the post World War II period, was shown for the first time in the US capital in presence of the two of filmmakers, Jonas Ohman and Vincas Sruoginis.