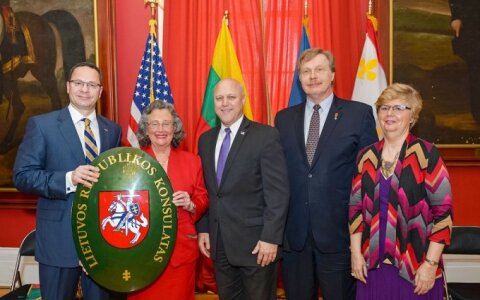 On Monday, 15 December 2014, in the presence of the Lithuanian Ambassador to the USA, Žygimantas Pavilionis and a host of local dignitaries, including Mayor of New Orleans, Mitchell Landrieu, the brand new Lithuanian Honourable Consulate was inaugurated in New Orleans, Louisiana USA.

During a ceremony at noontime in Gallier Hall, the old New Orleans City Hall, Jacquelyn ‘Jacky’ Brechtel Clarkson became the 23rd Honourable Consul of Lithuania to the United States. Mayor Mitchell Landrieu of the City of New Orleans hosted this milestone event in the presence of an overflow